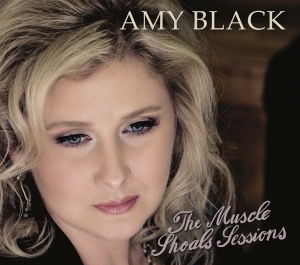 For Amy Black, Muscle Shoals, Ala., has always held a special magic. Her parents were born there, and some of her fondest memories were made during frequent visits to both sets of grandparents. She spent so much time in “the Shoals,” it felt more like home than many of the places she’d actually lived. She even knew the local hangouts and town lore. Or thought she did.

Black remembers passing FAME Studios often; it was right on the main drag. But she had no awareness then of its musical history or impact, much less any inkling that she’d wind up making music her career. Little could she know that one day, a session with the legendary Muscle Shoals keyboardist Spooner Oldham would launch her on a journey of discovery that would give her an even deeper connection with a place she loves. After Oldham, one of Muscle Shoals’ original “Swampers” session players, was serendipitously invited to perform on her 2013 EP The Muscle Shoals Session, her interest in the sound and its story was awakened. She fell so in love — and felt so at home — with the sweet soul music he’d helped craft decades before, she expanded the EP into an entire album of Shoals classics and seamlessly blended originals. The Muscle Shoals Sessions, her third solo release, arrives June 9, 2015 on her own Reuben Records label.

Recorded at FAME with producer/bass player Lex Price and featuring contributions by Oldham, guitarist Will Kimbrough and singers Ann and Regina McCrary, and a horn section led by Muscle Shoals Horns ringleader Charles Rose, and the drumming of Paul Griffith and Bryan Owings, these songs showcase a vocalist who expertly balances confidence and vulnerability, toughness and tenderness. Sliding and slinking her way through each note, Black never fails to nail the spot where gospel, blues and R&B collide — and transform into soul. Inspired by Etta James, Mavis Staples, Wilson Pickett, Aretha Franklin and so many others who recorded some of modern music’s most iconic songs in this little Alabama hamlet, Black’s project pays homage to magic made at both FAME and Muscle Shoals Sound Studio, as well as to her beloved grandparents, and the cherished memories she carries of childhood sojourns.

“Making this music has changed me as an artist. It's altered my musical course and I'm so glad,” says Black.” Black had originally booked time at FAME to record her song, “Alabama,” an ode to her late grandfather, for her 2014 release, This is Home. She wound up cutting the track at the historic Studio A in Nashville, so she banked the time for later — and came up with the idea of releasing a four-track EP of Muscle Shoals nuggets as a further reference to the concept of home.

Price got Oldham to join Black and Nashvillians Kimbrough (a Mobile, Ala., native) and drummer Paul Griffith in that session.

Back in Boston, where she’d lived since she was 15, Black did an EP release “pop-up” show with fellow singer-songwriter Sarah Borges that was so well received they did more throughout New England. Black even performed the show in Muscle Shoals with Oldham and original Swampers bassist David Hood.

“I got more and more comfortable and confident with the material and started enjoying myself immensely,” she recalls. “It seemed audiences were, too. Performing this music live woke something up in me. I put my guitar down and danced, and used my voice in new ways I didn’t know I could.”

Though Black says the EP was intended mainly as a teaser for This is Home, it organically grew into so much more; she couldn’t help diving deeper.

“When you come to something a little late, you’re trying to find your path,” she observes. “It’s a journey, and for me, the Muscle Shoals piece has been so key because it’s helped me tap into the music that speaks to my soul.”

When she says “late,” Black’s referring to her revelation, at 35, that she wanted to start singing again after years of inactivity. Though she had sung in church since childhood, fell under Bonnie Raitt’s spell at 16 and joined bands in college, she went on to build a successful marketing career with no thought of pursuing music. Once the muse gripped her, however, it didn’t let go. Black released her first album of original material, One Time, in 2011.

When she recorded the EP, Black sought to avoid overly obvious selections. She chose Arthur Alexander’s “You Better Move On,” the Dan Penn/Rick Hall/Oscar Franks co-write “You Left the Water Running,” Phillip Mitchell’s “Starting All Over Again” and, to connect past and present, the Black Keys’ “Tighten Up” (from their Shoals-recorded Brothers album).

For the full-length Sessions, she added a funky Lou Rawls version of Sam Cooke’s “Bring It On Home”; the Oldham/Dan Penn composition “Uptight, Good Man”; Don Covay’s “Watch Dog” (originally recorded by Etta James); a smokin’ take on Bob Dylan’s “Gotta Serve Somebody”; and an even bluesier, sultrier rendition of the old spiritual, “You Gotta Move,” than the Stones’ Sticky Fingers version.

Regarding her originals on the album, she says, “I wanted to challenge myself to contribute to the project by crafting some songs that embody the Muscle Shoals spirit.” One result is “Please Don’t Give Up on Me,” one of several tracks elegantly embellished by the McCrarys’ harmonies and the solid grooves of drummer Bryan Owings, whose FAME credits include recent work with Alicia Keys. The scorcher “Woman on Fire,” another original, draws on the Black Keys’ vibe. And the sensual, percolating “Get to Me” gives a nod to Dusty Springfield.

Now, she wants to educate others about Muscle Shoals, this special corner of the world that means so much to her. For Black, this is one more chapter of an amazing odyssey, one that started with her simple desire to “get out and sing,” then paved a circular road right back to the place that, musically and emotionally, feels like home.