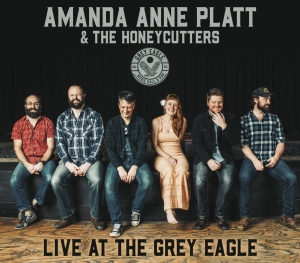 Amanda Anne Platt & The Honeycutters capture the emotional delivery of her original and extraordinary songwriting on Live At The Grey Eagle, recorded live in Asheville, NC.

This collection spotlights Asheville's seminal Americana/Country outfit at an ideal time in their career. The dynamic performance recorded over two nights in front of a rabid hometown crowd results in everything from rambunctious renderings of the group’s edgy 70’s-influenced folk and country to fan-favorite sing-a-longs to moments of raw exposure for Platt as she stands solo with only her guitar and soulful vocals.

Evolved versions of selected songs from the group’s five prior releases and three new originals written by Platt take on new life when played live. With a palpable audience reaction that only a renowned musical destination like Asheville’s Grey Eagle can provide, the result is a magical union of artist and audience in the moment.

“I've wanted to do a live album for a long time. I think that when a band has been touring together, and everyone is really in step with one another, the songs take on an entirely different spirit live. Some of the older songs have grown and changed with me over the years, and I wanted to capture that, too. Live versions simply have more of a pulse to them than studio recordings,” says Platt. “I wanted to do it at the Grey Eagle because for me, that was one of my first ‘white whales’ in Asheville. I loved seeing music there and dreamed of headlining someday. Then in 2012, we sold out our first show there! It's always been a special place for me. I also think it encourages a kind of wildness in the audience that you don't get everywhere, which I wanted for the album.”

Live At The Grey Eagle is an authentic representation of the Asheville region’s quintessential roots music sound and music scene this flagship band helped define.