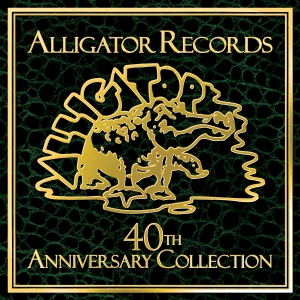 You could say that Alligator Records was born in January, 1970, at a little neighborhood bar called Florence’s Lounge on Chicago’s South Side. On a Sunday afternoon, a blues fan newly arrived in the city dropped in to check out a gig by a tall, gangly guitarist that everyone called “Dog.” When I stepped into the crowded little club packed with dancing, drinking, laughing patrons, I was overwhelmed by joyful, raw and energized electric boogie blues. Hound Dog Taylor, perched on a folding chair with a steel slide on the fifth of his six fingers, was pouring out piercing, distorted licks and chords on a cheap Japanese guitar and singing in a high, cracking true bluesman’s voice. He was accompanied only by a broken-toothed second guitarist named Brewer Phillips, playing ever-changing bass lines on an old Fender Telecaster, and a gum-chewing drummer named Ted Harvey who propelled every song forward, picking up the tempo on his minimalist kit, and making it impossible to keep from dancing. It was simply the happiest music I ever heard, and I knew it had to be recorded.

I spent the next year and a half learning everything I could about making and selling records from my boss and mentor, Bob Koester of Delmark Records. Finally, in May of 1971, I was ready to take this amazing little band into the studio. I wanted to capture the spirit of Florence’s Lounge on tape, for all the world to hear. And fueled by a sufficient amount of Canadian Club and the encouragement of my co-producer Wesley Race, they delivered just that spirit. They fulfilled my dream, and started another one—now I wanted to record the other wonderful bands I was hearing every night in the little blues bars on the South and West Sides of Chicago, musicians like Koko Taylor and Fenton Robinson and Carey Bell and Son Seals. And soon, the dream expanded to recording blues musicians from all across the country, legendary artists like Albert Collins and Professor Longhair and Gatemouth Brown and Johnny Otis, and talented newcomers like Shemekia Copeland and Corey Harris.

When I created Alligator Records, the very first promo piece to promote that very first Hound Dog Taylor album was headed “Genuine Houserockin’ Music.” That became our slogan, and we wear it proudly today. “Genuine” because the music we record is deeply rooted in the blues tradition (even when it pushes the standard definition of blues) and is created by musicians who have honed their songs not on synthesizers in their bedrooms, but in front of real audiences, responding to the emotional needs of their listeners. “House” instead of “theatre” or “arena” or “stadium,” because our music is ultimately intimate, even when it’s big and loud. It’s not meant to be presented. It’s meant to be shared between the musicians and the audience, like everyone at Florence’s shared the music with Hound Dog Taylor. And “Rockin’” because it’s designed to move you. Most of Alligator’s records will move your feet or your body, but we’ve tried to make records that will move that other part of you—your soul. Sometimes that can mean music that cleanses your inner pain by pulling it out of you, the “hurts so good” that is so special to the blues. And sometimes it just means the pure release and fun of musicians pouring their energy into a great groove.

Over the forty years, our definition of “Genuine Houserockin’ Music” has expanded to include not only pure blues artists, but also musicians and songwriters who have taken the spirit of the blues and created their own sounds and styles, sometimes called roots rock or rockabilly or front porch soul or, in a few cases, gospel, the ultimate soul-rockin’ music. But our mission has remained the same—to record honest, blues-infused music that moves the feet and soothes the soul, and hopefully makes you feel as good as a Sunday afternoon at Florence’s Lounge.