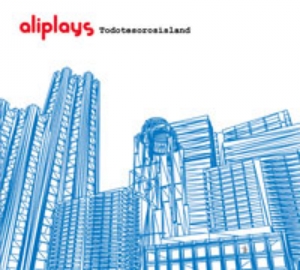 Patrick Moriceau aka Aliplays is born and spends the first ten years of his life in the Ivory Coast. Evoked through his stage-name reference to the boxer Mohamed Ali, this childhood in Africa influences Patrick and even today the memories continue to enrich his creative drive. Soon after moving to Paris, Patrick asks his parents for a piano. But even as early as 1983-1984, electronic instruments pull him into their universe through groups such as Art Of Noise, Duran Duran, Kraftwerk, Jean-Michel Jarre, Laurie Anderson… For Patrick, this new sound is a revelation, and he fantasizes of one day owning a DX7, a Juno or a Polysix so he can play like his idols. Until that fated day when his finances permit him the instrument of his dreams, he makes the most of his old-school cassette player. And when, finally, at the age of 15, he purchases a sampler, the event revolutionizes his relationship to music. With his new gear, Patrick makes his first tentative stab at writing songs. His desire to pursue music as a career crystallizes, and he obtains a degree in musicology from the
Sorbonne. Over the next several years, Patrick devotes himself fully to his music and starts to compose seriously for short films (Les buchers qu’on ignore / Prix Kieslowsky 2000) and animated films (Splotsh / Imagina 2000).
He plays the clarinet, the bass, and the piano in various groups. Today, in addition to Aliplays, Patrick is also a member of the French folk group, Bazarnaüm.
In 2000, Patrick releases his first album Pom Z, and it receives good reviews. Two years later, the German label Eleganz discovers Patrick’s talent, asking him for an album and two tracks for the compilation Das Ist Musik. The album, entitled TodosTesorosIsland, does not then make it to print because of the label’s financial difficulties. This opus, which should have disappeared from circulation like so many other star-crossed projects, gets a break when a sound-engineer friend offers to re-master it. Patrick continues to promote the album by sending it to radio stations. Finally, Radio Nova notices it and plays the track Ecoutes, declaring loud and clear that the album is not yet distributed and in need of a label. Yann, from the label Ozore Age, seated behind his computer, hears this acclaim, contacts Patrick, and proposes to put out the record on the E-BEAT division of his label. At last, TodosTesosrosIsland gets the chance to
reach your ears. If this album has persisted in the face of such tempests, there are good reasons. And you will find these reasons among its melodies, a breeze of Electro Pop, delicately arranged, and suspended by Ariadnian thread upon currents of polished enrapture. In Ola, electronic sounds respond with an echo to the brass instruments and chords, surging rhythms like a Centaur carrying the weight of the world. Progressively, the tracks open doors for us to a fragile universe of murmured texts. The images intermingle to form a harmonious clamor, an unlikely get-together between Aphex Twin, Lali Puna, and Prokofiev, sprinkled by African influences beneath the vertiginous glitter of a work inhabited by blissful shoe-gazing. Dub sounds make their appearance on ADE, and avoid the usual vulgarity and precociousness. The cadences accelerate and tail off, each rhythm telling its own story in black and white or highdefinition
color, in the spirit of dancing bodies on a corporeal sea of fleeting sensations. In the track Panic, the pop style veers toward
an amorous escapade, while the shadow of Polyphonic Size lingers over the eighties-style undulations of Ecoutes.
With TodosTesorosIsland, Aliplays flirts with poetry as he places Electronic music at new crossroads, rich with nuance, where organic instrumentation locks with a crystalline carapace in these tracks destined to endure. The reasons for the resurrection can’t be articulated. But after listening to TodosTesorosIsland, we feel them in our every pore.
1
What's This
Advertisement