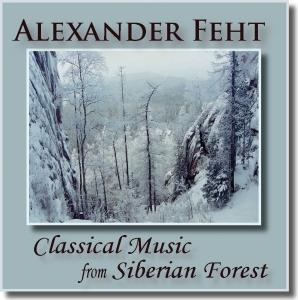 Tonal music, argues Alexander Feht, should not be left to pop, just as rhyme shouldn’t be left only to greeting cards. There is power here, as well as pleasure. The natural mathematical relationships of frequencies, the meaningful symbols found out by the busily connecting human brain, the original and harmonious: these remain.

Indeed, they do. It’s not that listening to Feht’s music is easy – rather, it’s impossible not to listen. Equally, it’s impossible to think of anything else while its complex, delicate, and powerful structures play out. Anyone who’s ever been gripped by passionate emotion or frozen in a moment of hypnotic, silent realization cannot fail to fall still – avid, attentive, listening.

This was the discovery made with Demon, his first album. Its seventeen songs dip into the different cycles of Feht’s extensive oeuvre, with lyrics drawn from Pushkin, Shelley, Lermontov, and Poe, among others. Arion: Pushkin Songs enters deeper into Feht’s music, with a complete 2-CD cycle of works set to Pushkin’s lyrics. To Russian listeners, these have the resonance and familiarity of Coleridge, Browning, or Wordsworth. For English listeners not yet acquainted with the great Russian poet, the liner notes provide helpful translations. The music, however, supplies what no transliteration into English words can ever do: the musicality and complex wealth of Pushkin’s verse.

Both Demon and Arion are performed by Nikolay Dorozhkin, the tenor, and Sergey Chechyotko, the pianist. Whatever the ease with which one is swept into Feht’s music, its performance is technically exacting. For years, the composer scouted for performers who would not only grasp the music’s character but meet its demands. Dorozhkin’s brilliant voice and rare skill, Chechyotko’s vast knowledge and virtuosity, at last brought the complex compositions to fruition.

It’s no surprise, then, that the same two perform Feht’s next collection, The Prophet, based on the work of Mikhail Lermontov. This Russian Romantic is often compared to Percy Bysshe Shelley, both in their discontent with their societies and the legacy of influence that each left behind. The titular poem addresses exactly this: a prophet who preaches love and truth is hounded from the towns to starve in the deserts – whereupon the old men point him out as living evidence of his own folly.

A similar note is struck in the title of Feht’s first collection. A “demon”, in Russian, is both the familiar demon of theology and a precise literary trope – a bitter man dissatisfied with the world. Both Pushkin and Lermontov wrote poems titled Demon, in this sense, and Rubinstein gave the same name to his opera. Feht’s cultural background gives him the exact concept for his life experience.

In Siberia, at the height of the USSR, Alexander Feht was the first child born in the new Akademgorodok – “academy town”. Its harsh climate and remote location discouraged established scientists. Instead, an extraordinary mix of new graduates and free thinkers came, drawn by opportunities denied them in the cities. Among these was Alexander Feht’s father, a mathematician known for his anti-Soviet activity. In the brief ottopel, or thaw, after Stalin’s death, once unthinkable free discussion flourished in the new town. And a three-year-old began learning the violin.

The freedom couldn’t last: the thought-police returned. At Feht’s music college, he was expected to compose works glorifying Party and government. He refused. Like Lermontov’s novice in the poem Mtsyri, he preferred dangerous freedom to servitude. He graduated, despite this refusal, by winning awards in competitions he entered anonymously.

The victory was Phyrric. Qualified but unsubservient, Feht couldn’t work as a musician. He did construction work. He was a night guard. He wrote poems in private without hope of publication and composed his music without hope of performance – only his closest friends even knew all this existed. How much easier to join the old men than insist on the vision of love and truth! But the Soviet compromises sickened him.

Married with a child, however, he needed to supplement his ditch-digger’s income and translation filled the gap. Without a translator’s diploma, he could only work illegally through middlemen. Once, he was given a classified US Navy document – the young anti-Soviet poet and draft dodger translating US military papers for Soviet authorities. He deliberately mistranslated the critical information.

This precarious peace ended sharply. His brother-in-law, Dimitri Sokolenko, escaped to America. As a traitor’s sister, Alexander’s wife lost her job. Alexander himself was ordered to Afghanistan – or, if he refused, to a mental asylum. With the advent of Gorbachev’s perestroika, however, another option arose: the KGB was only too happy to rid the country of its troublemakers.

That didn’t mean they’d make it easy. The Fehts needed an invitation from a relative, a year’s salary for the visas, and a way of smuggling out Alexander’s compositions – no manuscripts were allowed out of the USSR. From the United States, Dimitri concocted a fictitious aunt. The Fehts sold all their possessions to raise the money. Every page of Alexander’s scores was photographed; they gave the rolls of film to Western tourists, who agreed to carry them through customs and send them on to Dimitri. At last the Fehts set off – by train, to savour the moment of crossing the border.

Once in the US, Feht worked as a translator to support his family, and was finally free to build his reputation as a composer. At last, he brings into the open what he’d worked on so secretively all those years, a music whose intensity speaks of harsh experience but whose beauty prevails.
4
What's This
Advertisement