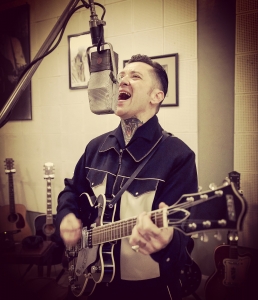 These awards, organized by the well known Dale Watson, give thewinners the title of being the best on the planet in their category.
And Al Dual has won the title of the best male Rockabilly artist ofthat edition after a glorious performance at the Graceland Theater.

AL DUAL
Al Dual, Spanish guitarist, composer, songwriter, producer and performer. Duals name is clearly a reflection of his ability to switch from one musical style to another. Though Al originates from Spain, he is fluent with the universal language of music.
Al’s musical roots first stemmed from ‘50’s Rock & Roll and promptly branched to Rockabilly, Blues, Surf, Western Swing, Jazz, Classical. Duals interest in a variety of music led him to travel Europe and America to master several styles.

Duals first journey to United States was in 2002. He landed in Music City-Nashville, Tennessee, where he immersed himself in North American musical roots. Sun Records and Honky Tonk Row opened the doors, and Al Dual found a new world. This passage led him to discover a deep understanding of the diversities between cultures and more essentially the common bond we can all share: music. In years to follow, Al would offer his talents as a guitarist, composer of BSOs and movie orchestration, Radio and TV production, album production, as well as song co-writer. Consistently eager to widen his musical education, in 2007 he completed classical guitar studies, as well as Film Composition and Orchestration. Al learned from the great masters.

In 2015 appears his first LP, The Early Tapes & Instrumental Rare © Retrosonic. Música Fundamental 2015 ( Huelva, Spain), where he shows early recordings with his particular vision of classics surf and Rock & Roll themes.
Although Dual is well-known as the Guitarist for Spain’s superb Rockabilly act, “Pike Cavalero” with whom he has played in all Spanish and European Rockabilly Festivals, he had also played with numerous great artists in Spain such as Charlie Hightone and US as Chris Casello, Eddie Nichols, Paul Pigat, Tommy Harkenrider, Mike Turturro, Ron Felton, Lisa Pankratz, Mike Sánchez, Sue Moreno, Chan Romero, Ron Landis, Chuc Onofrio, Matthew Menke & many more.

He has performed at best greats clubs across Europe also American as "Kensington Club", "The Tower", "Spike's" "Till Two Club" "The Juke Joint", "Eastside Luv" and "The Continental Club" in Austin, Texas, Temple American country music.
After a long period of composition and recording, Al Dual shows himself in a new facet, more complete and mature as a singer and guitarist. With the birth of his new EP, begins 2018 gigs with a wild repertoire and a powerful direct as the frontman of his new band.
1
What's This
Advertisement