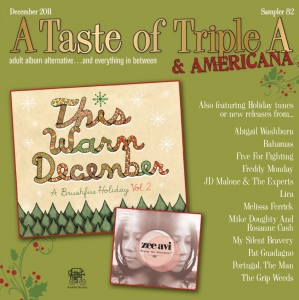 A Taste Of Triple A is a monthly CD sampler that delivers great new music and information to Triple A and Americana radio stations, including a host of singer/songwriters, rock bands, acoustic combos, bluesmen and purveyors of reggae, roots, alt-country and virtually all things Americana.

Some artists who have appeared on A Taste Of Triple A are Paul McCartney, Adele and Fitz & The Tantrums; Bob Dylan, Los Lonely Boys and Rachael Sage; Robert Plant, Mat Kearney and Delbert McClinton; John Fogerty, Fleet Foxes and the Dave Matthews Band; John Mayer, Blitzen Trapper and The Fray; and Cyril Neville, Band Of Horses and The Head And The Heart.