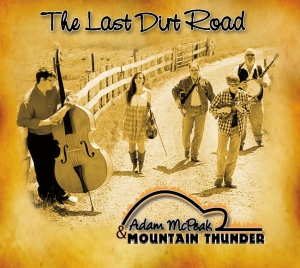 Adam McPeak, son of Mike McPeak of the legendary McPeak Brothers, started his own band at the age of 13. Adam knew he had some big shoes to fill, being the only McPeak since his dad's generation, to play bluegrass music. After announcing one day that he wanted to play the mandolin, he took to it like it was his calling. Adam played on stage with the McPeak Brothers and at local competitions for a short while before starting his band. Living in the Blue Ridge Mountains, it is a normal thing to find bluegrass concerts and talent right in your back door, any day of the week.. Adam started going to these events in search of talent for his band, and before long he found exactly what he wanted!
Adam McPeak & Mountain Thunder started out playing fiddlers conventions, (what better way to get large audience attention), but to their amazement, this youth band was winning them!!!!! they began reaching out to other events to play shows and benefits and before you know it was competing in Nashville at the SPBGMA national band championship in which they placed 9th and again placing 10th..
The band was quickly gaining attention and getting bookings at prestigious events like Song of The Mountains, a PBS affiliate hosted by Tim White. They also were invited to open for some bluegrass greats such as James King band, Jr Sisk and Ramblers Choice, The Boxcars, Russell Moore & III Tyme Out...
Adam McPeak & Mountain Thunder have a permanent video at the Blue Ridge Music Center that was filmed by Two Rivers Productions, and hosted by Joe Wilson, that tells about the cultures and heritages of people from the Appalachian Mountains. The BRMC is located on the Blue Ridge Parkway and is the home of bluegrass concerts, cultural events and museums. The video is also permanently displayed at The Heartwood, located in Abingdon Virginia. These are part of The Crooked Road affiliates which also is incorporated with the heritages of folk, americana, bluegrass and old time music.
Adam McPeak & Mountain Thunder are the representative band for The Crooked Road Music Concerts along the East Coast. Jack Henshelwood is the coordinator of the Crooked Road Music Tour, the band is scheduled to preform for this tour in October.
To stay current on events and locations please visit our website at www.adammcpeak.com
you can also find us on Facebook on the Adam McPeak & Mountain Thunder band page.
50
What's This
Advertisement