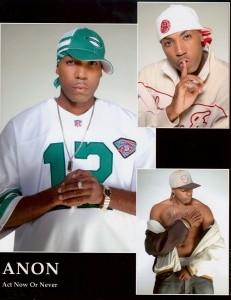 When you hear the phrase"Act Now Or Never," it carries a certain sense of urgency. In the world of hip hop it represents an acronym for a detroit emcee that goes by the name of A.N.O.N. He embodies the necessity for conscious creativity that hip hop has been lacking in the " dropit like it"s hot era.

Blessed with a gift for reporting the problems of the urban community in a musical style that embodies the rhythmic patterns of song with the concrete edginess of rap, A.N.O.N. masterfully captures an audience through the use of emotion and style. A.N.O.N.,who honed his skills on the "Motor City" streets rhyming his way out of the infamous Brewster Projects, continues an illustrious legacy from a city that has produced everything from the "Motown Sound" to the legendary "8 Mile" battles.

After building a name for himself in his home town , A.N.O.N.made the pilgrimage to Los Angeles where he has blessed the stage with likes of Snoop Dogg and an array of the West Coast's elite rhyme slingers. It is no suprise that A.N.O.N can hold his own in any city due to the fact he personifies the words versatility and adaptability. The diversity of his fan base alone speaks volumes about his talent His audience represents everything from the youthful vigor of adolescence that appreciate the soulful sounds of Frankie Beverly& Maze,the Ghettopoettic styling of R.Kelly,and the durtysouthelegance of Outcast.A.N.O.N is trulyan emcee in that he has cleverly perfected the art of being a "Master of Ceremonies. A.N.O.N., in his own words, "represents the underdog." When the world said he couldn't, he did He is a symbol for those who believe in achieving the impossible dream. His ambition, determination, and pure will to succeed are metaphors for all of us in the world that feel that we are on the outside looking in. He has crafted a style that transcends race, gender, creed,and environment.A.N.O.N. is about to give the worlda dose of his well -needed medicine. The only thing we can do in return is to, "Act Now Or Never."