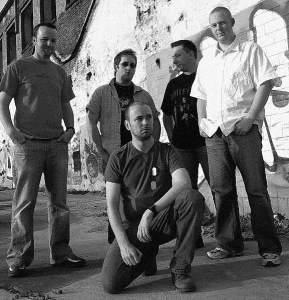 June 2009 was an exciting watershed for 9Lies. It was the month when almost all we have worked towards as a band and fans collectively came to fruition with the announcement of our first BIG budget UK and Ireland release. WooHOO! (you heard it here first!)

Since the release in 2006 to critical acclaim of the 'Behind It All' album, its been a non stop rollercoaster ride, with the title track 'Behind it All' finding home as the theme tune to 'Our Prisoner' in the USA.

In 07 the Song 'Slippin Away' was downloaded more than 43,000 times and chosen by ASCAP for excellence in song writing at Music Expo 07 in L.A.

And the last two years have been our biggest and best to date, seeing us travel to Poland to play the Vena Music Festival in Łódź to thousands of screaming fans alongside the Sugababes and Fun Lov'in Criminals. Being invited to play FMI 08 in Brazil, licensing 'We R1' to Techno Sweat for use on their exercise CD's, 18000 people joined us on our 2 International Myspace sites, we gathered over 900 groupies since joining Bebo, with fans placing our songs in over 1500 of their play lists! the release of the first video game ever to use our music 'Trucker 2' is imminent! Oh Yeah!

And to top it all off, we have just returned from a mini tour of Germany, which went down a storm, so much so, that there will now be a larger tour later in the year, followed by a tour of the USA, and this is down to you the fans! So Thank you!!

To be kept upto date with all the exciting happenings taking place in 09, please join the team on the 9Lies Mailing list and receive free members offers! Everyones welcome.