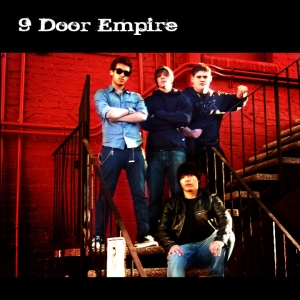 The four-piece group, all between the ages of 17 and 19, consists of Alex Walker (vocals, guitar) Jhon Vento (guitar,) Max Galdamez (drums,) and Jesse "Jet" Eagle (bass.)

It all started a couple of years ago when Alex met Max in 10th grade Math class in High School. They decided to jam together to see how it goes. After a few jam sessions, Alex and Max stuck together, and started collaborating on writing Songs for their future Band, back then "Fatal Beauty."

They were able to get their Schoolmate Jhon, to commit to being a member of the Band. By launching a Facebook search for a Bassist, they finally found the missing link, when Jesse joined the Group.

Their debut live performance was on July 21st. 2010 at the Aqua Lounge, in Beverly Hills, CA (as Fatal Beauty) which was received greatly. Several other performances already followed.

A lot of good Song material has already been created in the meantime, so that 9DE currently is in the Studio with their first Album production. Their first Single "Breakdown," was recorded at the Sound Salon in Hollywood, CA, with the help of the Studio owner/engineer Joey Ayoub.

Producer Michael McGregor (who currently has several of his own compositions on the Movie and Soundtrack of Sex In The City 2) did an excellent embellishment of the original recording, and turned out an exiting, and commercial Electronic Rock Mix of the Track which can be compared to the sounds of Nine Inch Nails, 30 Seconds to Mars, and Pendulum.

Even though this Single Mix is quite different in the stylistic of the upcoming 9 DE Album, the Band is very exited about their debut Single release of this Track.

9DE are eagerly looking forward to the completion of the Album, as well as regional and national Tours in the USA, Europe, Asia, and many other countries.