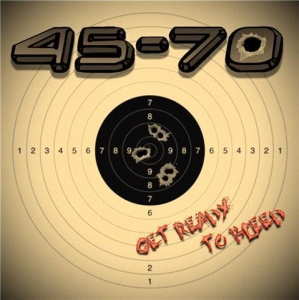 45-70 was born and breed on loud, raw, live hard rock and metal from the 80s and 90s. All the members were born in the great white north. Far from big cities, clubs, and stadiums where the only audience`s are in small local bars that offer only cover bands. With no local out source for there music, they were forced to write and jam for each other and themselves. They gave 100% from the heart rock n`roll, whether it be a garage or basement built studio. Living and breathing music, there influences are shown from plain clothed Metallica to early raw Motley- Crue.
Tired of the digitally overproduced sound of the new hard rock, they made a pack to get back to what they missed playing and hearing. They started writing and playing the sound and type of music that they wanted to hear.
Staying away from mainstream labels and media, they decided to rely souly on local friends , fans and each other for input to produce there own songs.
Armed with high gained guitars set on 10 and a hard hitting balls to the wall percussionist, they let it all hang out in every recording. They play and sing from there heart, nothing else. Writing and arranging all there own songs the way that feels the best. They are your everyday musicians without the rock star dream. There goal is to play heavy music and to have as much fun doing it as possible.
Only being heard by the local few. They were persuaded into offering their music to the masses.
.
So this is the beginning, the beginning of the loud, raw,100% rock`n`roll machine we`ll come to love as
45-70