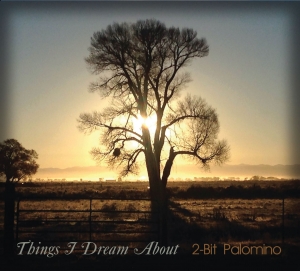 Recently signed to Howlin' Dog Records, 2-Bit Palomino are the 2011 and 2013 Texas Vocal Group of the Year (as awarded by The Academy of Texas Music). Together 5 years now, this trio of fine Texas Singer/Songwriters have really hit their stride musically! Having toured the US and charting on the US Americana Radio charts at 106 (as an indie), 2-Bit Palomino is quickly becoming a household name in Americana, Folk and Singer/Songwriter music circles.
Identifiable by their trademark harmonies, this trio of Houston singer/songwriters bring so much to the table musically. Their music is rich, melodic and harmony driven, while their songwriting is quite magical. Their live performances leave audiences with a sense that they have really witnessed something special.
2-Bit Palomino is Bill Ward (Guitar, Keyboards, Vocal), Andi Renfree (Percussion, Kazoo, Vocal) and Ren Renfree (Guitar, Mandolin, Ukulele and Vocal). All three of these talented musicians have made their mark on the Texas Music, Americana and Folk Music scenes.
They are currently putting the finishing touches on their latest CD "Things I Dream About" on Howlin' Dog Records with producer Don Richmond. This CD will be a collection of their finest songs yet! It is due for release this spring, so watch and listen for it on all of your favorite sites and stations.
Bill, Andi and Ren have many recorded songwriting credits, including Andi's co-write "Buffalo Grass" which was released by Capitol Records recording artist Chris LeDoux on his final studio album "Horsepower".
From California to Wyoming, from Dallas to Georgia...2-Bit Palomino will take you on one helluva ride. So...whaddya say? Giddyup!
6
What's This
Advertisement