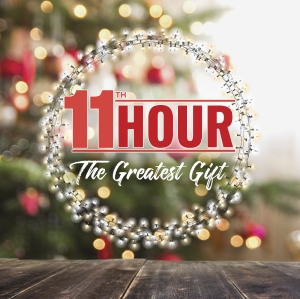 Capturing the wonder and awe of the Christmas season, 11th Hour’s The Greatest Gift features familiar, upbeat and joyful songs that spread the news of Christ’s birth.

Beginning with a festive, “Angels We Have Heard On High,” this album immediately shows 11th Hour’s vocal talent. With soprano Amber Eppinette taking lead, the song sets the tone of joyful anticipation and celebration during Christmas.

Alto Jaquita Lindsey sings lead on the somber “What Child Is This,” sharing the Biblical story of Christmas and inspiring reverence toward the miraculous birth of Christ.

“Joy To The World” embraces the overwhelming happiness Earth felt when Christ was born, while “O Holy Night” is a moment of stillness for quiet worship.

The album closes with the title track, written by Allan Eppinette. It’s a moving reminder that God sending Jesus to die for our sins and bring salvation will be the greatest gift we ever receive.

Filled with a blend of familiar Christmas songs and hymns, 11th Hour’s The Greatest Gift provides a joyful soundtrack for the season that celebrates family and fun, but keeps the true meaning of Christmas.
______________________

About 11th Hour
Over the last ten years of traveling on the road, 11th Hour has seen God do some incredible things. With musical influences such as Karen Peck and New River, The Martins, Gold City, and The Kingsmen, 11th Hour has stayed fresh and relevant while maintaining a versatile sound, able to lead congregations in moving times of worship. After reaching high acclaim, in 2012, 11th Hour signed a recording contract with Crossroads Music. They’ve had five #1 songs on the Singing News chart and been nominated for numerous awards in Southern Gospel music such as Singing News Trio of the Year and AGM Album of the Year, while Amber Eppinette was nominated for Soprano of the Year. 11th Hour features Eppinette, alto singer Jaquita Lindsey and tenor singer Logan Smith.