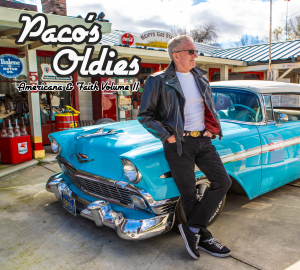 A Note From Paco:
Ahhh... the challenging world of singing and entertaining... as in how to get noticed when you're a young budding possible future superstar. Make that doubly challenging when you choose to do the impossible” as a senior citizen chasing a life long dream!

My dream is becoming a reality thanks to my wonderful supporting family and friends, but also in great part thanks to those in the industry who support and believe in me.

This 8th album would not have been possible without the collective efforts, warmth and love of Ric Poulin and Chris Billias from Bristol Recording Studios in Boston; and from Peggy Iafrate & Jamie Ramsey at Strega Entertainment Group, along with the entire Strega team.
You are all a major life blessing to me and I thank you from the bottom of my heart, for your combined talents, encouragement and never ending support. I am in your debt.
Love always, Paco

One of my own favorite Oldies from the 1950’s – by the Honeydrippers. This inspired us to shoot not only the album graphics photos but also a full-length music video of the same name up in Woodland California at the simply fantastic “Reiff’s Gas Station Garage and Museum” and also on Zuma Beach in Malibu.


A classic Oldie that stirs our individual memories of our first “true loves” in and around the age of sixteen.


Clarence “Frogman” Henry gave us this sentimental classic in 1960.


Gerry Dorsey was not a household name, until he officially changed it to the familiar Englebert Humperdink and his star took off. This is one of my favorite Englebert songs.


Recorded by many artists including Bobby Vinton, the 1957 original version I fondly remember was by Bobby Helms.


This soul-full ballad most often sung by female artists was first released by country pop recording artist Skeeter Davis and later by The Carpenters.


I Can’t Stop Loving You was written by Don Gibson in Nashville as a lost love ballad. It was first made incredibly popular by Kitty Wells and years later by the great Ray Charles.


A 1958 country song written by Bill Mack covered by a variety of artists but it wasn’t until LeAnn Rimes released her version in 1996 that it won a Grammy as Best Country Song and became a true classic.


The most famous version of this Country Song was recorded by Jim Reeves in 1962. I absolutely love it’s soft, sultry and heartfelt lyrics and instrumentals.


A ballad composed by Willie Nelson, it took off after being covered and released by Patsy Cline in 1962…becoming one of her signature songs.

Another 1962 hit by singer-songwriter Gene Pitney it was written by the incredible duo of Hal David and Burt Bacharach.

If you have never heard Sailor Jerri’s version of this wonderful Leonard Cohen ballad, dedicated to the incredible men and women in our Military, you are in for a tearful surprise.

Plain and simple…I love this Country and consider it one of the most wonderful places in the World to call home. I am proud of America and was proud to serve in the US navy.

Written by Bart Millard the song was released in 1999 by his band “Mercy Me”. It captured our collective hearts and souls and was “Song Of The Year”. I simply love the lyrics and instrumentals.


PACO BIOGRAPHY
Paco is a full-time singer, actor and entertainer, affiliated with Bristol
Recording Studios in Boston where he recorded this, his 8th CD Album of Oldies, Americana and Songs of Faith. His albums and songs play
regularly on the radio and internet both in America and internationally,
through AirPlayDirect out of Nashville, with many making it to “The Charts”. He is also signed with Strega Entertainment Group of Boston, as his Agents. Recently, they assisted him in forming his first band, a six-member group of phenomenal young musicians primarily from Berklee College of Music in Boston.