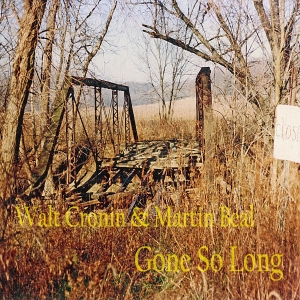 Walt’s new CD: “ Gone So Long,” is Walt’s latest collaboration with friend and musician Martin Beal.“ Gone So Long,” is a batch of 12 songs that express a longing for all things past and hope for all things future. Written in Walt’s eclectic style covering Folk, Country and Americana with Rock overtones. Martin’s amazing array of musicality and arrangements combined with Walt’s lyrical strengths and songwriting skills have created a powerful and embracing album.
As always, Walt’s lyrical phrasings evoke pictures and stories that stretch the imagination while grounding you in the human condition. His last CD: California I Gotta Run was listed in the top twenty country albums of 2010 by Any Major Dude With Half A Heart. It also peaked at # 2 on Roots / Americana Country Internet Airplay Chart in October of the same year. Released as an internet radio album, this new CD will be available on both terrestrial and internet medias.
His first CD: “ The Gousters,” released in 2005 was a collaboration with Zander Schloss, an actor-musician who has also written with the late Joe Strummer and Scott Weiland. This was Walt’s late entry into the Los Angeles music scene at the tender age of 50.
“The Gousters” remained in the top 50 on Roots Music Report Folk Chart for 60 weeks.
His diagnosis of Post-Traumatic Stress from his stint as a medic in the Vietnam war prevents Walt from performing but his lyrical style is described here by Brenda Barbee, Staff Reviewer of Roots Music Report. “But there is a great deal more to their music than just great sound. Listen closely to the lyrics, for they reveal extraordinary songwriting talent. Within those lyrics is a rich experiential content that could only be produced by one who has strong emotional ties to the theme.”
Though a late runner in the songwriting styles he emulates such as Woody Guthrie, Bob Dylan, The Byrds, Johnny Cash and Emmy Lou Harris to name only a few, Walt has strengthened his gifts immeasurably on this, his 4th release with the combined efforts of his friend, producer, arranger and musician Martin Beal of The Racket Room in Santa Ana, CA.
Songs conveying strong components of our hopes staying alive in troubled times along with his unique glimpses into human emotions and a poignant song of a loved one lost inevitably in our singular paths in life. Perhaps these songs can be listened to in the key of insight.