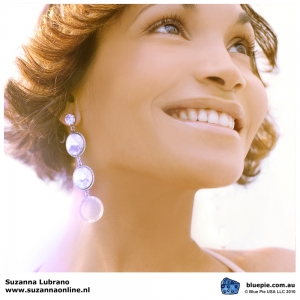 Blue Pie Records is thrilled to announce one of its newest and most talented signings, Suzanna Lubrano. We are very honoured to have an artist of her calibre on board with us.

Suzanna carries a stunning aura and her musical talents extend beyond the norm. She has been compared to some of the greatest pop divas of our world; Celine Dion, Beyonce, Mariah Carey and J-Lo. Her talent has been recognised by many, and has won her awards around the globe.

Originally from Cape Verde, West of Africa, Lubrano moved to The Netherlands at the age of four. Like many superstars, she started singing as a young child, but was quickly recognised and encouraged to start singing professionally at the age of eighteen.

Her discography is large and broad and includes a plethora of genres ranging from Zouk (a style of Afro-Caribbean rhythmic music), Latin pop, acoustic, R’n’B and Western pop. Together with her first band Rabelados, she made her debut as a professional singer recording a very successful CD album. However, her musical taste was too adventurous and so she started a solo career, resulting in three solo albums; Semi Bo Nes Mund, Fofo and Tudo Pa Bo. These albums featured some of the hottest tracks including the title track from her third album, Tudo Pa Bo, which received international praise. 2008 and 2009 saw the release of the albums Saida and Festa Mascarado. In 2010, her first Concert DVD was released, Live at Off-Corso, featuring Dutch saxophonist Candy Dulfer. Live at Off-Corso was originally a TV concert, which has now been televised in numerous countries on four continents, including Brazil, Portugal and many more. Suzanna is currently working on a new solo project, due out later this year.

“This is not crossover music, at least not her part. To fully enjoy Suzanna’s gifts, you’re gonna have to be the one to crossover to her. We think you should.” (Ebony Mag, USA)

Suzanna Lubrano has been recognised and awarded for her extraordinary talent. She has won major awards, including the prestigious Kora All African Music Award for the year’s Best African Female Artist (2003), at an event watched by millions of TV viewers worldwide. In 2010 she was awarded with a Museke Online African Award for Best African Artist based in the Diaspora; and in March of this year she became the most awarded female solo artist at the first and prestigious Cabo Verde Music Awards (CVMA), held in the Cape Verdean Capital Praia, winning two awards for Festa Mascarado.

Damien Reilly has been working with René Romer from TransCity to develop this agreement. TransCity manages Suzanna Lubrano’s music worldwide under René’s leadership. To see more on TransCity, head to: www.transcity.com

A special thanks to Banji Adebunmi, who works at Blue Pie’s South African Office. Banji was the one who found Suzanna Lubrano in Transcity and brought her to Blue Pie.

We are very excited to work with Suzanna Lubrano and her 7-piece band, and continue to drive the machine of success that she so easily has established for herself!


< Go Back
5
What's This
Advertisement