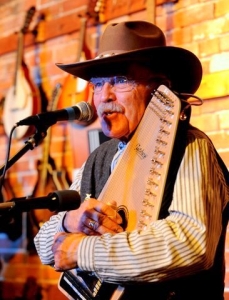 Premier Oscar Schmidt Autoharpist, singer and Colorado folk legend Roz Brown has built a mighty impressive career as a captivating entertainer and recording artist performing and recording classic folk music on his own terms for over thirty-five years.

Born June 19, 1937 in Madison, Wisconsin Roz started his musical career in the 5th grade when his dad bought him his first trumpet. He played in school bands through high school and continued playing in Navy bands.

In 1975 Roz went to work as an electronics technician at Cobe Laboratories in Lakewood, Colorado. It was then that he started to really dive into the folk music scene.
“The folk music of the ‘60's had always stirred something deep in my soul says Roz. I was already hitting folk music clubs and festivals after work most every weekend when I happened to catch a life changing performance by Autoharp Master Bryan Bowers at the Oxford Hotel Cruise Room.

Bryan and I ended up hanging out after the concert till the wee hours and shortly afterwards I bought my first two Autoharps from him and early on I found I could actually connect with a lot of the folk songs I loved on those Autoharps and through the years I have managed to carve out quite an incredible musical career with my 400+ and ever growing playlist.”

At 74 Roz shows no signs of slowing down as he sets course in 2011 with a brand new release produced by his son, Memphis/Nashville keyboardist and producer Paul Brown titled; A Cowboy and his Sweetheart.
Inspired by his sweetheart Barbara, A Cowboy and his Sweetheart is a stellar collection of romantic love songs, many of which were originally recorded by Country legend Don Williams.

“I’ve been listening to these songs over and over since the 1970’s when Don Williams recorded many of them, Says Roz. So it’s been a great joy to finally record my own versions of them.”

As an active Colorado mountain rescue volunteer with Alpine Rescue Team based in Evergreen Colorado and a volunteer ranch hand for his Colorado sweetheart Roz still performs a staggering 300+ dates a year and tirelessly gives back through his music by making retirement and nursing homes a part of his regular touring schedule.

“Not long after I bought those first two Autoharps from Bryan, explains Roz, I ended up in the hospital to have knee surgery. Seeing how lonely a place like that could be I told myself that once I recovered I’d go back to hospitals and nursing homes to entertain every chance I got to help people take their mind off of whatever pains, illness or lonely times they may be going through.”

Also a significant part on Roz’s regular touring schedule is the historic Buckhorn Exchange in Denver, CO where Roz has been entertaining for thirty years now.