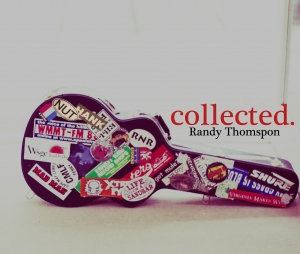 Virginia has history nestled among its rolling hills and verdant valleys. The Piedmont region has witnessed turbulent and formative events that have in turn produced an uncommonly rich variety of compelling musical styles and voices. From Blues to Country to Bluegrass and beyond, it is a heritage that Virginia-based singer/songwriter Randy Thompson intuitively understands and brings vividly to life. His music lovingly embraces the past even as it blazes kicking, picking, singing and rocking into the 21st Century.

Randy Thompson can trace a Virginia bloodline back to the early 1700s. Thompson, who now resides in the small town of Clifton, gives true meaning to the term "roots music." Like his musical antecedents, Randy draws inspiration directly from his own experience, creating starkly drawn musical and lyrical pictures.

Randy’s 1998 debut, ‘Wearin' Blue,’ garnered widespread critical acclaim, while his 2004 sophomore release, 'That's Not Me', expanded on achievements and generated significant airplay on both a national and international level, debuting at No. 1 on the International Hotdisc chart and reaching Top 40 on national Americana, Country, and Roots Rock charts. AboutCountry.com was among a number of sites and magazines that listed 'That's Not Me' as one of the top 10 albums of 2004.

The release of 'Further On’ in 2008 took Randy Thompson to a whole new level, receiving positive reviews from radio and industry worldwide. Brian Ahern from Country Music UK said, “for me, this is the very essence of what country music is all about…. Through Randy Thompson and Further On country music has done it again”. It was instantly picked up by Sirius XM and hundreds of radio stations, both Americana and Country, all over the US, Europe and Australia and spawned three more Top 5 Hotdisc chart singles. The album opened many new doors for the artist including, European tours, national television, a movie soundtrack appearance, and an NPR radio special.

‘Collected’ stands ready to raise the bar once again for Randy Thompson. The album will be simultaneously released in the US and Europe on Jan 24th 2012. ‘Collected’ is a compilation of fifteen tracks recorded over the last thirteen years, including three newly released tracks, a 2011 single, and eleven songs taken from Randy’s previous releases. The album includes eight Top 10 International Hotdisc singles and a Top 40 American country single, ‘Sound Of The Rain’. For Thompson, the new CD is a humble offering to the fans who, he says, "Chose the songs themselves. These are the tunes that my fans ask for again and again at my shows. I wanted this to be the album that you'd play in the car when you're driving down Route 66 with the windows wide open." There are a few ballads here, but the bulk of the material is more mid to up-tempo Americana country rockers. Regardless of tempo, Thompson's distinctive voice captures the listener, while his unerring guitar work and compelling pen continue to justify his ever-expanding fan base.

The Randy Thompson Band is a touring powerhouse. The Washington Post said of a recent performance, ‘He can really put it across in a live setting with undeniable confidence….a compelling performer”. The Randy Thompson Band hits the road in 2012 to fulfill on the unstoppable momentum they have built and forged on the road, the path carved from hard-lived experience. Randy Thompson’s music, like the man, cannot be stuck in one place and expected to stay put. Call it country, call it roots music, call it Americana; but if you want to call an artist who knows where he comes from, where he stands and how to make the most out of both……call Randy Thompson. It's the sound of the Virginia hills, of war and peace and love and fear. Randy Thompson’s music is the sometimes sad, often simple and always beautiful sound of the truth.