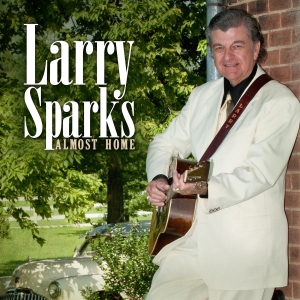 Still lonesome after all these years, Larry Sparks is nearing half a century at the forefront of bluegrass. He counts that milestone from 1963, when a 16-year-old from Southwest Ohio became Ralph and Carter Stanley’s lead guitarist. As Carter’s health deteriorated, Sparks’ role grew and soon after his brother’s death in December 1966, Ralph hired Sparks to sing lead, setting the standard that remains to this day.

Before his Clinch Mountain apprenticeship, Sparks’ music was born out of Ohio’s industrial bluegrass tradition, forged in Dayton and surrounding factory towns along Ohio’s I-75 corridor. The Stanleys were regulars on that “Little Kentucky” circuit, thanks to frequent recording trips to Cincinnati’s King Records, and they had a huge impact on area musicians. Like his mentor Carter, Sparks grew up playing for the displaced Kentuckians who’d left mines and mountain farms for better pay and safer conditions on the assembly lines of Frigidaire, NCR, Fisher Body and the like. When shifts ended, they’d head for nearby clubs, where Sparks, Roy Lee Centers, Red Allen, Frank Wakefield, Bob and Sonny Osborne, Paul “Moon” Mullins, Noah Crase and dozens more future bluegrass legends all sang them back home.

“A lot of people, including my parents, came out of Kentucky and that’s where they landed at,” Sparks recalls. “The work brought people there and they’d come out and listen to the music at night. You might see a fight or two before the night is over. Those places can take their toll on you. But that lifestyle just wasn’t for me. I knew life had more to offer.”

He left that life behind, but he still remembers how much that music meant to those folks. Larry Sparks knows the power of a song. And while not a prolific writer, he has a gift for finding great ones and making them his own. No other bluegrass singer today has more signature songs – “John Deere Tractor,” “Tennessee 1949,” “A Face in the Crowd,” “I’ve Just Seen the Rock of Ages,” “Roving Gambler,”and “It’s Too Late to Walk the Floor.”

“You just know when you hear it,” Sparks explains. “There’s good songs in all kinds of music. You don’t have to try to write a bluegrass song. Just write a song, you can change things around and make it a good bluegrass song.”

He’s stayed true to the sound that made his 1972 national debut, Ramblin’ Bluegrass, an instant classic (he'd previously had a couple regional releases on Pine Tree). Starday released Ramblin’ Bluegrass at the same time as New Grass Revival’s debut and those LPs showed the two, very different, futures of bluegrass – NGR’s rock-influenced jams versus Sparks’ bedrock new traditionalism. In the nearly 40 years since, Sparks has continued honing his restrained, yet powerful, style, that soulful voice and bluesy guitar leading the way for generations of musicians, his admirers today including Alison Krauss and Dan Tyminski.

What first set Larry Sparks apart continues to set him apart – a consistency of musical vision that allows for innovation, while holding fast to lessons learned from what he calls “the four bands” – bluegrass’ first generation of Bill Monroe, the Stanleys, Flatt & Scruggs and Reno & Smiley. “You knew who they were as soon as you heard them. They were original.”

He shares that originality, maintaining his distinctive sound through personnel changes in his Lonesome Ramblers and reliance on outside songwriters. In music, that kind of consistency is a sign of something even more rare and valuable – integrity.

“You’ve got to have it and you’ve got to keep it.” Sparks states. “You’ve got to be strong. You can’t let people change you. I’m open to all kinds of ideas. Still, if it’s not me, I can’t use it. Musicians can change you if you let it happen. You have to hold on to what you have and I’ve held on to my music the same way the four bands did. It’s got to be taken care of.”

Today, Sparks lives in rural Indiana, not far from where he grew up. His sons Larry D and Lawrence often play with their dad. Larry D is bassist on Almost Home.

Sparks has come a long, long way from the green Ohio kid just making his mark in bluegrass, but he hasn’t forgotten anything and today, he knows more than ever what’s important. The songs here pay tribute to the sounds, the people, the feelings and even the flavors of times gone by. Like a good compass, you can follow Larry Sparks’ “true lonesome” from “Lines on the Highway” to “Back Road.” He’ll take you where you need to go. You’re Almost Home.

The Songs
“Almost Home” It’s an old bluegrass joke that songs are either about leaving home or wanting to go back. That’s been a Sparks signature from the start and this nostalgic opener follows that tradition. “I heard it and right off I knew it was a good song for me to sing.”

“Blue Mountain Melody” is deep in the bluesy vein that runs through Sparks’ music, his “true lonesome sound.”

“Lines on the Highway” Almost 50 years after taking a seat on the Stanley bus, the Lonesome Rambler is still on the road. Propelled by Ron Stewart’s fine fiddling, this uptempo number states Sparks’ philosophy, “The highway may be lonesome, but it’s real.”

“Momma’s Apron Strings” takes us back to simpler times, a theme revisited in “There’s More That Holds the Picture,” the idea that simple household items can hold the richest memories.

“Gunfighter’s Revenge” is a departure for Sparks, a Western ballad, a specialty of one of his favorite singers. “I sang a little of ‘El Paso’ before I did that. I had to watch and not get into a Marty Robbins sound,” Sparks says.

“Back Road” is an original Sparks instrumental he wrote on banjo, the title inspired by younger son Lawrence’s early driving experiences. “I’d always be a nervous wreck until he got home. If I didn’t hear from him I’d call him. ‘Where you at?’ ‘On the back roads, coming home. I’m on the back roads.’ He said it so much that when I was hunting for a title, I thought about that.”

“Picture Me There” is a road song any homesick musician can relate to. “When I’m sleeping alone, my heart goes back home.”

“Send Me the Pillow You Dream On” is Sparks’ bluesy take on the late Hank Locklin’s 1957 hit. “He just was such a stylist and sang so good. I saw him about five years ago on the Opry and he was singing great, just belting it out, right on pitch, too.”

“Bring Em On Back” pays tribute to that classic era of “Kitty Wells and Johnnie & Jack,” and Sunday dinners that ended with “nanner puddin’.”

“Momma” sounds like a sequel to “John Deere Tractor,” opening with Sparks’ bluesy guitar and Stewart’s brooding fiddle. Here, the wayward son has come out the other side, with thanks to the mother who never gave up on him. “Momma, I wonder sometimes how I ever got by, running wild, driving you crazy and telling you lies.”

“Somebody Touched Me” Faith connects all these songs – faith in family, in the road, in traditional music and traditional values – and Almost Home fittingly ends at the source of Sparks’ faith, with this rousing gospel hand-clapper driven by Tyler Mullins’ banjo.