Delta Spirit - History From Below 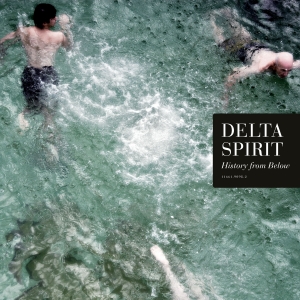 We played something like 290 shows in the last 2 years. We didn’t plan on touring so long on Ode to Sunshine, but you can’t say no to a good thing. More and more kids kept coming to see us and bands that we love took us around the country, even Natalie Portman’s favorite.

After a while one begins to grow tired of playing the same 10 songs night after night. Don’t get me wrong, we still smile every time we play ‘Strange Vine,’ but then we wrote a song about St. Francis. It felt so good to play something new. It was about a year and a half ago that we started playing it on tour. Then there was ‘Vivian,’ ‘9/11,’ ‘Bushwick Blues,’ ‘Salt in the Wound,’ ‘Vitaly’ and a few other songs that we ended up ditching. Finally it was August and we had alas come to the end of the road for Ode to Sunshine. Most bands wouldn’t want to see each other for about a year after almost 3 years of constant touring, but instead we rented a big blue craftsman house in Long Beach and moved in together. Within the week we began converting one of the garages into a practice space and we started the hammering process. ‘White Table,’ ‘Ransom Man,’ ‘Scarecrow,’ ‘Devil Knows You’re Dead’ and we wrapped it up with ‘Golden State.’

Kelly has a studio in his parents’ “basement” and we started recording there, part demoing; well we thought that we were demoing but some of the stuff was so good we had to keep it. After a while though we began spending more time watching Dexter on-demand than making music, so we decided that it was time to find another spot. We thought about finding an abandoned church somewhere, half-joked about some spot in Greece, assumed that we would end up at a big fancy L.A. studio, but finally landed at Prairie Sun in Cotati, CA. Mr. Waits did a few albums there and they had a place for us to stay on site, so we went for it. It’s basically a converted barn, but don’t let that fool you, it’s a great room! The place is plastered with bad art and has an awkward sitting area made of two thrift store couches and a painted blue trunk. You walk outside and find yourself surrounded by roosters and beautiful countryside. We found a little 3-par golf course down the street, a local “Irish” pub, and the local coffee shop, Starbucks. I met a Russian Orthodox Priest who told me a story about the time that he was called to Prairie Sun to do a blessing and exorcism after some gnarly metal band came through and left some bad vibes and who knows what else behind.

We had some frustrating days, some fun ones too. Our good friends Eli and Bo came up and really helped us turn a bunch of songs into an album. That sounds easy and obvious, but no. There were some moments where we were all pretty sure that we were wasting the world’s dwindling reserve of 2” tape. It wasn’t an easy album to make. It could have been about three different albums, but thankfully we found just one. It doesn’t sound a whole lot like the last album. The next one won’t sound like this one. We love this album and we really think other people will too. – Jon Jameson