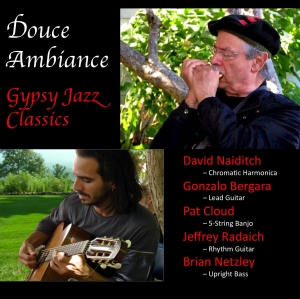 About this album
Award: David's version of “Oh, Lady Be Good” was selected runner-up for the best instrumental by the International Acoustic Music Awards (IAMA).

Most of the tunes on this album are Gypsy jazz classics, many written in the early last century by the father of Gypsy jazz, Django Reinhardt. David selected these tunes for their beautiful melody lines, which especially lend themselves to the sound of his chromatic harmonica.

On this album, Gonzalo Bergara plays lead and rhythm guitar. He is widely recognized as one of the finest Gypsy jazz guitarists. After touring the world for years with the John Jorgenson Quintet, he started his own band, playing a unique blend of traditional Gypsy jazz with a Latin sound stemming from his childhood in Buenos Aires.

The legendary Pat Cloud plays the 5-string banjo. Although Django began his music career playing 6-string banjo, the banjo is as unusual in Gypsy jazz as the harmonica. With Pat’s mastery of melodic 5-string banjo, however, he introduces a new sound and approach to Gypsy jazz.

Jeffrey Radaich plays rhythm guitar, but in Noto Swing, he trades off some fine lead playing with Gonzalo. Brian Netzley plays the upright bass. Jeffrey and Brian are both members of The Gonzalo Bergara Quartet.

Harmonica used in Gypsy jazz
In the 1930s, Belgian guitar virtuoso Django Reinhardt, together with French violinist Stephane Grappelli, formed the Hot Club of France and introduced the world to Gypsy jazz. Gypsy jazz is typically acoustic music featuring the guitar, but often includes the violin, bass, and accordion. It tends to be played in the sharp keys instead of the flat keys favored by horn players. The stringed instruments typically provide percussion instead of drums. The music is often fast and fiery, but can be melodic and sublime.

Some claim that Gypsy jazz is Europe’s greatest contribution to jazz. Although the Gypsy jazz played today is typically classified as a type of jazz, it often has a strong European folk element with rhythms, instrumentation, and guitar techniques that are unique to the genre.

The chromatic harmonica is rarely used in Gypsy jazz, but it does have some history. Django recorded several tunes with chromatic harmonica virtuoso Larry Adler and played with the jazz harmonica pioneer, Max Geldray. Today, straight-ahead jazz players, including jazz harmonica players, sometimes dabble in Gypsy jazz, but most have to work hard if they really want to capture the feel and peculiarities of this genre. David Naiditch one of the few harmonica players who specializes in Gypsy jazz. He feels the harmonica works especially well because it can sound a lot like an accordion and at times can mimic the violin.

David's Bio
David has been part of the Los Angeles music scene for many years. He started with the blues and eventually delved into other genres: bluegrass, country swing, and Django Reinhardt-inspired Gypsy jazz.

David’s musical journey began in the early ‘60s, when he was tutored on the diatonic harmonica by the legendary blues icon Sonny Terry. In the mid-1960s, David taught harmonica at the Ashgrove, a club that was the focal point of the Los Angeles folk music revival. Years later, David taught and performed at other venues in the Los Angeles area, such as McCabe’s Guitar Shop, Boulevard Music, the Coffee Gallery Backstage, and Viva Cantina.

In the mid-’90s, David started focusing on the chromatic harmonica. He honed his skills by attending numerous music jams and gigs, armed only with a chromatic in the key of C. By playing in all keys, David became comfortable playing by ear and improvising in many styles of music.