Cumberland River - The Life We Live 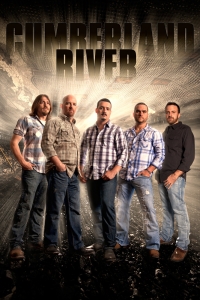 Cumberland River’s roots have run deep in Harlan County Kentucky hills for generations, so it is no surprise fans can hear the heritage of traditional bluegrass in their music. Their new album, THE LIVE WE LIVE was released in July 2011 on Rural Rhythm Records and certainly showcases the incredible songwriting talents of this hot young group with all five band members contributing to this impressive first national release.

The band actually began in 2009 and early on, they decided they would have to write their own material to ensure their music would appeal to both the younger generation as well as the fans of more traditional, bluegrass music. As evidenced by recent reviews from media and radio, plus their growing number of loyal fans, they have certainly accomplished that goal.

In July 29, 2010, Cumberland River was invited to perform for the writers and producers of the FX Network’s TV show, JUSTIFIED while they were in Harlan gathering information for their upcoming season. With only 24 hours notice, the band got together and wrote a song, “Justified” as a gift to the show. They received a standing ovation from the writers and producers, including Graham Yost, the multi-award winning writer and producer. Cumberland River added the song to their debut album, ROCK ISLAND EXPRESS released September 3, 2010 and a newly cut version appears as a bonus track on their new album.

TV viewer’s got a taste of Cumberland River’s music in the opening scene of the March 2, 2011 JUSTIFIED episode, “For Blood or Money,” when they heard the band performing an instrumental version of their original song “Justified” during the opening scene. On the April 6, 2011 episode, viewers got a full dose when fans could hear the band performing five more of their songs during the first 30 minutes. During that time frame, the show was averaging 3.9 million total viewers on the first run of Season Two with a multi-run weekly average of 7.2 million total viewers and gaining fans every week. Bluegrass music is alive and well on national TV!

CUMBERLAND RIVER is proud to announce the addition of Brad Gulley on guitar and vocals to the band. This hot new group continues to impress audiences with several strong lead vocalists including the talents of Dustin Middleton who provides lead vocals on his original song “Harlan Man” that debuted on the October 2011 Bluegrass Music Profiles Top 30 Hot Singles Chart. James Dean provides lead on his original song and the band’s first single, “Cold & Withered Heart” along with a new video that has been the #1 bluegrass video on Yallwire.com numerous weeks. Both songs appear on the group’s new album THE LIFE WE LIVE on Rural Rhythm Records.

CUMBERLAND RIVER made quite an impression during the International Bluegrass Music Association’s World of Bluegrass held in Nashville, TN October 2011. The band was chosen as an Official Showcase performer, and also performed numerous other times during the week long event including: Ernest Tubb Record Shop on Broadway, Rural Rhythm After Hours Showcase, the South Florida Bluegrass Association’s After Hours Showcase and more. The band also held meet n’ greets at their booth in the Exhibit Hall of the Nashville Convention Center where they met with radio djs, talent buyers and fans.

2012 gets off to a great start for Cumberland River with a new VIDEO RELEASE of their original song "Justified" (now up to over 20,000 hits on youtube) and the Season 3 premiere the TV show (original air date January 17, 2012) that featured their original song, "Antieham's Hill."

Look for the band at a concert or festival near you!