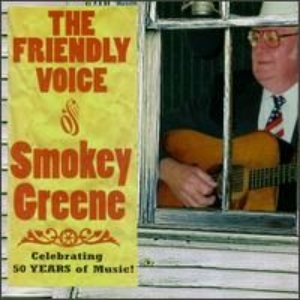 This album marks Smokey Greene’s 50th anniversary as a performer of country music. Around age 13, he learned to play his first instrument, the tenor banjo. By age 16 he had added the guitar, mandolin and fiddle to his skills. That same year he made his first professional appearance with his long time mentor, yodeling Slim Clark. After a nine year career in the Air Force he spent 20 years working radio, clubs, town halls, grange halls, and appeared on various TV shows in the Glenn Falls, NY and Rutland, VT area. In 1966 he opened his own club where he booked many of the nation’s top country and bluegrass acts. In the 70’s he toured New England with his band the Green Mountain Boys and started his own bluegrass festival which enjoyed a 16 year run. In 1992 he retired from his day job with the Schuylerville school system and began spending his winters in Florida, where he quickly became part of the bluegrass community and performs as a solo act to this day. Smokey Greene is a true pioneer in country music. He is one of the few entertainers who can walk on stage with just a guitar and have the audience demanding more at the end of the set. No matter who you are, there will be at least one song that he sings that will touch you. He entertains with the deft touch of a magician and can deliver the message in a song like no other. Be it funny or sad, his choice of material is truly unique.
Advertisement