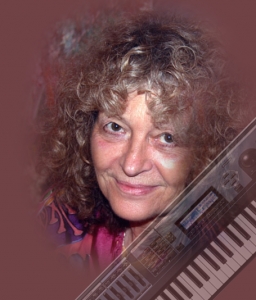 Suzanne's 30 years in the world of New Age music have provided her with incomparable knowledge, experience and contacts. Beyond being co-founder and CEO of Only New Age Music, Inc., and newagemusic.com, Suzanne is an international recording and performing artist whose background encompasses being a prime time TV "Pop Show" hostess (guests included the BeeGees, Grateful Dead, Keith Emerson, Donovan), a songwriter & composer, script writer, sound designer, producer, A&R record label executive, music publisher, label owner & manager, marketing consultant, and retailer. Together with her husband James Bell, Suzanne owned and operated the world-famous specialized audio gallery "Only New Age Music" in Los Angeles for 5 years.
She owns and operates now newagemusic.com - the #1 online source for new age music and represents digital rights (streaming, downloads and webcasting) to major internet players as well as the portal site NewAgeUniverse.com Her latest recording credits include "Resonance" with Gary Miraz as well as the audio series "Sounds of Nature" and "Tranquility" combining the state-of-the-art binaural recordings of Chuck Plaisance with her music. Seven of their titles made it into the top ten environmental charts at Amazon.com, including being #1 and #2 for over two years. Shirley Maclaine used Suzanne's music from the Reflecting Light album, the piece "Forever..." on her best-selling video and audiocassette titled "Inner Workout" and "Going Within". Suzanne also produced and directed the award winning video "Starflight" together with well known video and documentary producer Chris Toussaint.
Suzanne has been a consultant to hundreds of artists, producers, record labels, radio programmers, distributors and retailers. She is an expert on "alternative marketing campaigns", such as reaching bookstores, nature stores and other gift shops and has developed and supervised many mainstream and alternative marketing campaigns for independent labels and artists such as GolanaÂ, Constance Demby, Ray, Liquid Mind, Armen Chakmakian, Tajalli and many others. She has been marketing and promoting her own product line "Beyond" and other Indie labels worldwide.
Suzanne founded the International New Age Music Network in 1987. She produced and directed three International Conferences and the first New Age/World Music Festival at the Wiltern Theater (featuring artists such as Paul Horn, Steven Halpern, Tim Wheater, Jai Uttal a.o.).
In the New Age Music Guide by P.J.Birosik, published by MacMillan
it says: "...explorers, who helped lay the groundwork for what we now term New Age Music include Kitaro, Andreas Vollenweider, Vangelis, C.H.Deuter, Klaus Schulze, Paul Horn, Suzanne Doucet, Brian Eno and Paul Winter."
Life Magazine began their report on New Age Music with a quote from Suzanne, while specialized Keyboard Magazine acknowledged Suzanne for having "the most authoritative view on New Age Music," and the LA Times devoted a full page article to Suzanne in their Sunday Calendar section.
Magazines and TV production companies have interviewed her for their publications in Germany, Austria, France, Spain, Greece, Brazil, Japan, Taiwan, and South Korea.
Suzanne is the longest serving member of the annual Screening Committee of the New Age Category for NARASâ (Grammy Awards), helping to define the guidelines for New Age Music since 1987. Suzanne was part of the Presidential/Key Executive MBA Program at Pepperdine University, where she studied business administration. In Munich, Suzanne studied Psychology, at the Institute for Esoteric Psychology, as well as Composition at the Munich State Conservatory.