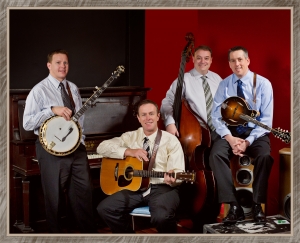 The Spinney Brothers' debut CD for Mountain Fever Records, Memories is due for release March 13th. The project produced by Ron Stewart includes music from notable songwriters such as Marshall Warwick, Carl Jackson, David Cooper, and Dave Lindsey as well as original music from Rick Spinney. The brother duo took great ride in the song selection for the project. "The traditions of great songs in the past is a big part of what music was built upon," states Rick Spinney. "And great songs now and for the future are what we believe will sustain and elevate the music." The first single, "Memories", was written by Marshall Warwick, a very well established songwriter who has penned numerous songs recorded by such artists as Marty Raybon, Pine Mountain Railroad and Larry Sparks including the very popular duet with Sparks and Rhonda Vincent, "1-800-Do-U-Care".

From the Annapolis Valley of Nova Scotia, Canada, the Spinney Brothers are comprised of Allan Spinney , Rick Spinney, Gary Dalrymple and Darryl Hebb.

Brothers Allan and Rick debuted their band in 1992, showcasing a tight brother duet vocal style that was immediately recognized for it's energetic and distinctive sound.

The cornerstone of the Spinney Brothers musical identity is the sound of traditional, southern-flavoured bluegrass music. The first generation bluegrass legends have been an important musical influence, yet their music is equally shaped by their personal lives and local heritage. By incorporating original material, which draws from various sources, the Spinney Brothers effortlessly intertwine the past with the present.

The Spinney Brothers believe in freshness and excitement of traditional bluegrass music. Brother duet singing, backed by supportive and complimentary instrumentation, is the foundation of their tasteful and recognizable sound. Give a listen, and you are sure to be entertained

Allan Spinney
Born in Hamilton, Ontario, Canada, on August 5, 1965. In 1969, his family moved back home to the Annapolis Valley of Nova Scotia. He now makes his home in Gaspereau, with his wife Lynn. Raised in the midst of a musical family, it was country and bluegrass music that played the largest role in his musical up bringing. At a very early age, Allan demonstrated the desire to be a performer. Home recordings have documented his vocal abilities, as early as age six. Shortly after, he took a strong interest in the organ. It was in 1979 however, upon buying his first guitar, that he started down the road to performing on stage. He began studying the guitar works of Smiley Bates, as well as the sounds of Bill Monroe & Flatt & Scruggs. It was the vocal harmonies of the Stanley Brothers however, that really appealed to Allan. He strongly encouraged his brother Rick to explore the music as well.

In 1989, Allan co-founded his first bluegrass band with his brother Rick. The “Bluegrass Student Union” was comprised of Allan, Rick, and their good friend, Steve Jackson. This formation performed at various school functions, variety shows, and benefits. By 1991, Allan was ready to put together a full bluegrass Band. His dream was realized, in the creation of The Spinney Brothers Bluegrass Band. Through out various personal changes, four independent recordings, and years of live performances, Allan continues to craft the Spinney Brothers style of traditional bluegrass music.

Rick Spinney
Born in Hamilton, Ontario, Canada, on August 5, 1966, one year to the day of his brother Allan. As Rick likes to point out, “he was his brothers first birthday present”. Rick makes his home in Gaspereau, Nova Scotia, with his wife Machaela and step-son Keegan. Compared to his brother, in his early school years, Rick did not spend as much time on music. Instead, Rick excelled in sports. First in soccer, and then in basketball. His dedication to team sports, found him on championship teams at numerous levels. It was with the persistence of his mother Wava, however, that Rick began examining his musical abilities.

In 1987, Rick obtained his first banjo. After some instruction from local musician Roy Thompson, and Canadian bluegrass great Vic Mullen, Rick was well on his way. Along with his brother, Rick began to study traditional bluegrass music. As a banjo player, the music of Earl Scruggs was very influential. Vocally, Rick and his brother worked on their own style of “brother duet” vocals. With the creation of the Spinney Brothers Bluegrass Band in 1991, Rick has continued to work tirelessly, in shaping the sound and image of the Spinney Bothers music. Rick is the main spokesman for the Band. As well, he handles bookings and promotions.

Gary Dalryimple
Gary Dalrymple was born in 1969 in Halifax, the capital of Nova Scotia. Gary, like Allan and Rick, grew up in a musical family. His father, Carl was a local Country and Bluegrass musician. Gary was exposed at an early age to the recordings of Country and Bluegrass greats like, Buck Owens, Merle Haggard, Flatt and Scruggs, and Reno and Smiley to name a few. Gary began attending Bluegrass festivals with his family and soon had an uncontrollable urge to play an instrument. He thought that he would play the 5-string banjo, but intuition steered him toward the mandolin. He bought his first mandolin in March of 1984, it was a "Newfeld" mandolin.
He was encouraged by local musicians at festivals to keep it up, and with the early inspiration of the pioneers of Bluegrass music, he strived to develop his style of Traditional Bluegrass. It was the drones and double stops of Benny Martin and Paul Warren, whom all played with Flatt and Scruggs, that caught his attention. Their style of fiddle convinced Gary that this music was extra special, and Gary decided to take up playing the fiddle as well.
Gary played with several local bands until 1993, when he joined the Spinney Brothers. With Gary southern bow on the fiddle and lonesome tremolo on his Gilchrist mandolin, Gary adds the final ingredient necessary for Genuine Acoustic Bluegrass Music.

Darryl Hebb
Born on May 1, 1965 in Windsor, he now lives in Mount Uniacke, NS. Some of his earliest musical memories are of listening to his father’s classic country records. Darryl’s first exposure to playing an instrument came through the High School Music program at Windsor Regional High School. He was exposed to Orchestra, Big Band Swing and Jazz and learned the team work of playing in a group through the High School band program. He played electric bass in a 6 piece jazz combo that won first place at the Canadian National High School Band competition in 1981. Subsequently, he received an Award of Recognition from The Nova Scotia government acknowledging the accomplishment.
Darryl’s first exposure to bluegrass was at a bluegrass festival in 1999. It took only one festival for him to be “hooked” and he has been an avid festival goer since. He purchased his first upright bass in 2004 and spent many late nights field jamming and learning the instrument. The festivals renewed Darryl’s interest in guitar, and he started learning to pick fiddle tunes on his Gallagher G55. Through the years Darryl has played with the bluegrass band; Shady Lane, country artists; Darrell Meyers and Audra Raulyns, local Texas Swing legends The Elliots, and has freelanced with several local country and rock bands. Darryl joined the Spinney Brothers in September, 2010
28
What's This
Advertisement