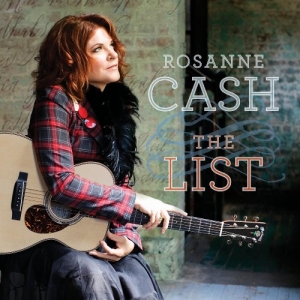 July 4, 2009 — New York, NY — Acclaimed singer-songwriter Rosanne Cash will release her 12th studio album, entitled The List, on Manhattan Records on October 6th, 2009. This stunning work features Cash’s contemporary interpretations of 12 classic songs culled from a list of essential country tunes that her legendary father Johnny gave her in 1973, and filtered through her own unique, sophisticated perspective.

Known primarily for her stellar songwriting, Cash showcases her incredible voice on The List — her first-ever covers record. As a result, the album is Rosanne Cash like you’ve never heard her before as she embraces her heritage and sings for the pure love and beauty of these songs which have shaped who she is as an artist.

The idea for The List came about while Cash was on tour promoting her 2006 studio album, the critically heralded, Grammy-nominated Black Cadillac — a reflective song cycle about the loss of her father, mother Vivian Liberto, and stepmother June Carter Cash. During the well-received multi-media event Black Cadillac: In Concert, Cash told audiences how, when she was 18, her father became alarmed that his daughter appeared to lack a deep understanding of country music (having been obsessed with The Beatles and steeped in Southern California rock and pop music). Johnny gave her a list of the “100 Essential Country Songs” and told her that it was her education and she should learn them all.

“The List was far-ranging and thorough,” Cash says. “It was assembled from my father’s intuitive understanding of each critical juncture in the evolution of country music. There were old Appalachian folk ballads, and the songs of Jimmie Rodgers and Woody Guthrie. The influence of gospel and Southern blues were crucial. Then he segued into rockabilly and the birth of modern country music by way of Hank Williams, and up to the present, which was then 1973. He also included a couple of his own songs. I endeavored to learn them all and it was an education,” she says. “I looked to that list as a standard of excellence, and to remind myself of the tradition from which I come. This album enables me to validate the connection to my heritage rather than run away from it, and to tie all the threads together: past and future, legacy and youth, tradition the timelessness.”

Through her stylish interpretations, Cash manages to transcend genre on The List, proving that these songs deserve a permanent place in the American Songbook. Produced and arranged by Grammy-Award winner John Leventhal (Cash’s husband, who also contributes striking guitar work throughout), The List includes Cash’s covers of songs by The Carter Family (“Bury Me Under the Weeping Willow”), Hank Williams (“Take These Chains From My Heart”), Jimmie Rodgers (“Miss The Mississippi and You”), Hank Cochran/Patsy Cline (“She’s Got You”), Merle Haggard (“Silver Wings”), and Bob Dylan (“Girl From the North Country,” famously done by Dylan and Johnny Cash in 1969). The album also features a host of special guests whom Cash admires, including Bruce Springsteen (on “Sea of Heartbreak”), Elvis Costello (on “Heartaches by the Number”), Wilco’s Jeff Tweedy (on “Long Black Veil”), and Rufus Wainwright (on “Silver Wings”).

The List is the first album Cash has made since she underwent surgery in 2007 for a benign brain condition, from which she has fully recovered. When it came time to record a new album, Cash was happy to step back from the heavy themes of Black Cadillac and do a covers record that showcased her voice. It also has enabled her to finally share with the world The List of songs her father passed down to her alone.