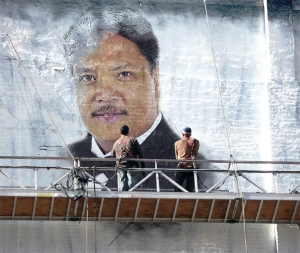 A very versatile multi award winning vocalist. Roland Valentino is also a published songwriter and a member of ASCAP. He has over 20 years of experience in live and studio performances. His velvety voice will melt your heart. He has performed at every imaginable venues, with live orchestras to pre-recorded tracks, from funerals to weddings, backyards and garages, night clubs and cruise ships, parks and stadiums, to hotels and convention centers. His albums include "Solo", "The Joy of Christmas", "My Romance", "Casablanca", "City of Angels-Ibigin Mahalin" and hundreds of credits as a demo singer. Contact email: phantom61@aol.com. Tel: 626-833-5108

Roland Valentino's second album released under Villar Records International is a compilation of six Tagalog songs and six English songs. Most of the Tagalog songs include classic songs previously released by Villar Records Philippines such as "Ibigin, Mahalin", "Dalagang Pilipina", "Di ba't Ako ay Tao ring may Damdamin", "Tangan Tangan", and "D'yos lamang ang Nakakaalam". Blending traditional and contemporary sounds, the new arrangements created by the very talented Yong Nalasa, Bill Newlin and Teo Franco along with Roland's very smooth and versatile vocal interpretation breathes new life to these great songs written by legendary songwriters of the Philippines. The song "Kailan pa Bayan ko" written by the late great Levi Celerio and the multi-talented Phillip Monseratt depicts the plight of Filipinos abroad sacrificing and agonizing being away from their country and their loved ones to support their families back home.
The six English songs are original compositions co-written by Valentino which reflects the experiences and observations Roland and his co-writers has perceived in their lives and the lives of others. The styles and tempos are eclectic and cover genres in rock, pop, jazz, and a hint of country to showcase Roland's vocal versatility. The title song "City of Angels" was originally written in 1984 by the late Paul Carmello who was a great friend of Valentino. City of Angels highlights many of the notable sites of Los Angeles and the dreams of the starry eyed Hollywood hopefuls. The haunting ballad "Christmas Without you" co-written by the incomparable Gale Stoddard was composed in 2001 after the deaths of Roland's mother, and Gale's husband and eldest daughter all within six months of each other. The song was then re-dedicated to the memories of the victims of the September 11, 2001 tragedy later that year.

Roland was one of the champions of Tawag ng Tanghalan USA in 1987-1988 who was awarded a recording contract by A&W Records headed by the late Allan Villar. His first album released by same company was "Casablanca". Since then, Roland has released a Spanish album "Solo" under Villar Records International headed by Peter and Sandra Villar. The album "Solo" are original Philippine music translated and sung in Spanish and is distributed internationally.

Roland has also recorded several demo albums for well known and aspiring songwriters and is busy recording voice-overs for commercials, radio spots and narrations in addition to performing and vocal coaching. His songs are also played in Australia, Germany, Japan and many parts of the world. A demo song he recorded, "Santa's Samba" written by Gale Stoddard and the late Ray Evans who wrote such classic hits as "Mona Lisa" and "Silver Bells" was featured on ABC World News Tonight and received fabulous reviews.
3
What's This
Advertisement