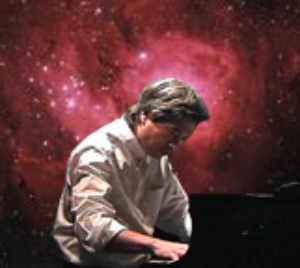 "I want to say Thank You so much for such a rich and rewarding program you gave yesterday at the Festival. Mark's music was extraordinary...Rock On! ---Sheila Cash, VA

Mark Torgeson is a classically trained pianist whose spontaneously created songs are passionate, joyful and filled with heartfelt expression. Drawing inspiration from nature and the cosmos, he delights audiences with his sense of childlike wonderment and unbridled enthusiasm.

Mark's style is classically influenced with an orientation toward the romantic and impressionistic, with hints of popular idioms. His repertoire is all original, with free improvisation forming a strong foundation in his concerts. Mark engages the audience by requesting they supply themes for him to play. These themes may range from natural elements - the sea, an evergreen forest - or be as diverse as human emotions - such as passion or grace. His ability to grasp an idea and make it musically sparkle continually thrills his audiences.

"It is the music of traveling, both in the body and beyond it...recommended for the healer and journeyer in all of us." ---Greg Hagin, Lightness of Being.

For twenty five years Mark has performed in the mid-Atlantic, Midwest and West coast regions. He believes we are at a major juncture in human consciousness - a time when music will be used to accelerate our ability to change by opening the heart and doorways of perception.

“Every major age of cultural evolution has been accompanied by parallel trends in the arts. Music with the intention of invoking this expansion is extremely powerful, and can be used as an agent of transformation.” ---Mark Torgeson

Mark was born in Tokyo to a Japanese mother and an American father. He grew up in the United States, melding the influences of the East and West in his music. He draws from the rich traditions of classical music and jazz to weave a tapestry both sophisticated and spontaneous. Through the themes of nature and the cosmos, one hears in this music the pulse of earthy elements and the sweeping cosmological stories of the stars.

"I was struck by the sweetness of the music. It had a Divine sweetness that created a space of safety...a space to relax, release and open. What a beautiful experience it was. I felt some of the expansiveness of my soul within me. Thank you, thank you, thank you." ---Carolyn Carlyle., Ph.D., VA

Mark's repertoire is always original, surprising, fueled by whim and the emotion of joy. The first half of his performances consist of all original music he has composed, and the second half is free improvisation on themes - natural, human or imagined - selected by the audience. Mark's ability to tune into the audience and the participatory nature of his songs created in the moment make his concerts very charged an electric.

"I just wanted to let you know how thankful I am for your special gift of transformational music... It helped me so much in the creative process of writing my book...worked like a charm on some unseen but deeply felt vibrational level. Thank you, again, for helping me reach that place in my heart where my dreams live." ---K.C. Craig , MD

Compositions at his concerts range from poignant impressionistic meditations to impassioned pastiches of syncopation, defining a style at once compelling yet complex. Concerts are punctuated with Mark's explanation of the transformational aspects of the music, and expositories on the more esoteric aspects of the creative process.

"My desire is not only to create lovely music, but a form which will be of use to others. We are in the midst of a major evolution of consciousness, and music is an important transformational tool in keeping step with this change." ---Mark Torgeson


Visit Mark's site to find more about him and his music: www.MarkTorgeson.com