Rick Lang - Little Did They Know 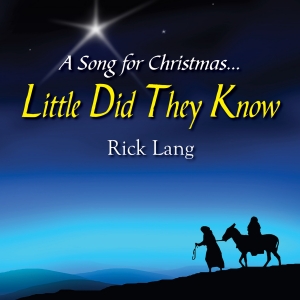 * Arranged and produced by Stephen Mougin, “Little Did They Know” features the elegant vocals of Jana Mougin (lead vocalist from the popular Euro band Fragment), Melonie Cannon, and a great cast of supporting musicians.


About The Song: Writing Christmas and Seasonal material has been a passion of mine for a very long time. It goes back to the influences and experiences I had as a child at Christmas in our New Hampshire home. There have been many great songs written about the birth of Jesus that we all long to hear at this time of the year. That being said, there still needs to be new songs written and recorded that hopefully will appeal to future generations as well. I want to be one of the writers that helps keeps the Nativity Story alive…. in peoples minds…and hearts
“Little Did The Know” focuses on the real life drama that took place just before and after Jesus was born…. on that very first Christmas day. Joseph and Mary had made the long and difficult journey form Nazareth to Bethlehem. When they arrived, the couple searched desperately for a suitable place to deliver their child, but were turned away time and again…. forced to take refuge in a cold dark stable. Little did anyone they encountered know what was to take place….would become “the greatest story ever told”.
– Rick Lang

The IMEA annual awards show was held on Saturday October, 24th 2015, 7:00 PM at the Marietta Performing Arts Center, Marietta Georgia. The IMEA presented awards in various categories and several genres, honoring the very best in independent music & theatre. Award nominees as well as performers came from all across the US as well as abroad.

We are excited to share the wonderful news that Rick was honored with the award For Holiday Song Of The Year. The song "That's What I Love About Christmas", co-written with Stephen Mougin, was the title cut of Rick's new Christmas/Seasonal album of the same name, and released on RLM records Oct 7, 2014. Produced and engineered by Stephen Mougin (Dark Shadow Recording) the award-winning track features: Annie Sellick, lead vocals;Joe Davidian, piano; Todd Parks, bass; Chris Brown, drums.

"That's What I Love About Christmas" also received an IMEA award
nomination for 2015 Holiday Album Of The Year.

The IMEA (International Music & Entertainment Association) is a non-profit organization whose purpose is to honor and recognize the best in independent music, theatre and live entertainment, internationally.

Jana joined the popular Euro band Fragment in 1992, originally as the lead singer, but has been the bands bass player since 2000. She graduated from Comenius University, Bratislava with a degree in journalism. Before she became a full time musician she made documentaries in Slovak Television and hosted her own music show on Radio Forte. in Trnava, Slovakia

Jana was voted Slovak Bluegrass Music Association (SkBMA) Vocalist of the year (1999,2000) and Bluegrass Association of Czech Republic Vocalist of the year (1997, 1998, 2000).
In 2005 she moved to Nashville, TN with her husband Stephen Mougin. In the past few years she recorded/performed with April Verch, Melonie Cannon, Thayer Washer, Pam Daley, Nedski and Mojo and Cages Bend.
Jana plays Fender Mustang Bass with pickups made by Curtis Novak (curtisnovak.com)

A native of New Hampshire, award-winning songwriter Rick Lang has become well known in the Bluegrass community and beyond. His songs have been covered by some of the most renowned artists in Bluegrass
music, Southern Gospel and even the Jazz world. Over 70 song cuts to his credit, the number keeps growing each year. Although most of his songs are self-composed, Rick has collaborated with several other notable writers in the Bluegrass and Gospel music
field in recent years.

Rick has released four studio recordings of his own to date. Each have featured all original Rick Lang compositions.

Rick's first Christmas album "The Season Of My Heart" (2003), was voted one of the top twenty five albums of the year by the National Folk Radio survey.

"Look To The Light", an all Gospel CD released in 2010 on Rural Rhythm Christian (RRC) was nominated for a GMA (Gospel Music Association) Dove Award as well as an IBMA (International Bluegrass Music Association) Gospel Recorded Event Of The Year.

In 2012 Rick recorded and released the Christmas single "Little Did They Know" on the Rural Rhythm Records Label....featuring Jana Mougin on vocals.

Rick's 2nd Christmas/Seasonal album, "That's What I Love About Christmas" was released on Oct 7, 2014 on his own RLM Music label. Unlike his previous Holiday recording, this one has a heavy jazz influence, some of the songs having the feel of some of the classic
Christmas songs of the '30s and '40s.

The title cut, written by Rick and Stephen Mougin, was awarded 2015 Holiday Song Of The Year by the IMEA (International Music & Entertainment Association) at their annual awards show at the Marietta Performing Arts Center, Marietta GA Saturday Oct 24, 2015.

In addition to a busy songwriting schedule, Rick does some freelance writing for Bluegrass Unlimited Magazine, conducts songwriting workshops, one-on-one songwriting lessons, and still actively performs
on occasion. Rick is an alumni of the IBMA eadership Bluegrass program (class of 2012), and is currently a member of the IBMA Songwriter committee.