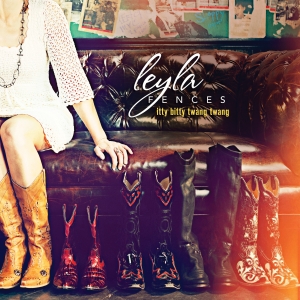 
"The Twang is the Thang in Leyla's new CD itty bitty twang twang...
from the reflections of "I Wonder" to kickin' cuts like "Pain Relief"
and the big hook of " Get the Truck Outta Here", it's Trad-country
all the way. It's really a great collection of original country
songs that my audience is going to love. "
- Ken Bass, Variety 95.1 FM - KALH
. . . . . . .

"Leyla is proof that honky-tonk is still alive
and well and fun to listen to when done well.
At a time when country music doesn’t sound like
country music, Leyla Fences is a breath of fresh air."
- Andrea Guy, Mossip
. . . . . . .

“I’ve never heard anybody describe my songs as sweet or romantic” Texas-born singer/songwriter Leyla Fences says when asked to describe her music. She hesitates before grinning and adding “but then again, no one’s ever called ME that either!”

Two short years after the release of her debut CD, Fences makes herself totally at home again with the sounds of traditional country on her second album itty bitty twang twang. Leyla's follow up to the well-received Liars, Cheats & Fools* (2010) presents country music fans 14 original tracks of self-penned dancing, drinking and cheating songs with the same compelling songwriting, strong female perspective and powerfully passionate vocal performances that listeners have come to expect from this Dallas native.

Never sweet, rarely romantic and always fun, Leyla’s songs hook you immediately with her smart style, bold personality and a sense of humor kin to the songs of Loretta Lynn and Dolly Parton. “There are a lot of women who relate to these lyrics and, while they might not be able to find the words to say what they are feeling for themselves, they can trust Leyla’s songs to say it for them.” (Kaye Golden-Wright of Kaye G. Wright Studios, Dallas, Tx). Note: No men were harmed in the making of this CD.

All 14 tracks on itty bitty twang twang were written in whole or co-written by Fences and blend her sassy style with a comedic touch while speaking both musically and lyrically about being in and out of love and moving on.

With steel guitar and fiddle on almost every song and refreshingly straight-forward honesty, itty bitty twang twang will remind you of country music the way it used to be. "Rather than portray life as a made-for-television Disney movie like the pop/country tendencies of Nashville’s music machine, Fences digs into the darker aspects of humanity that have traditionally made country music their home". (Wildy Haskell, Wildy's World)

“I found myself listening to today’s mainstream country and feeling two things,” says Leyla, “one, that it didn’t sound like country music anymore and two, that even though songs today might still portray everyday life, it’s mostly only the happy, picture-perfect parts. I sure wasn’t hearing songs that I could relate to based on what I was living at the time so I decided to write about those experiences – even though they didn’t all have fairytale endings.”

Always danceable and never pretentious, the clean sound of these original tunes lets every word and note be heard while tasteful production allows listeners to get the same great connection with the songs that Leyla's live audiences enjoy.

"Get the Truck Outta Here" - A fun, upbeat, kiss off bar anthem

"One More Honky Tonk" - a toe-tapping, shout out, drinking-to-get-over-you- tune that'll make you forget there was any heartache at all!

“Pain Relief” - a tongue-in-cheek mix of country and early rock and roll that will make you want more.

“Pretty Lies” - a tale of catching a love red-handed with another. A peppy beat, wavering steel guitar and compelling piano and fiddle features.

“What I Do” - slowed instrumentals and Fences’ emotional singing style. The closest Leyla might ever come to a tear-jerker!

....Plus 6 other true country originals, all with a story to tell! "There isn't a weak song in the bunch" (G.W. Hill, Music Street Journal)

The CD was recorded at Audio Dallas in Garland, Texas supported by seasoned professional musicians who have worked with recording artists such as LeAnn Rimes, Jack Ingram, Janie Fricke and Steve Holy.

The album was recorded and mixed by Paul Osborn, whose experience includes recording and/or mixing more than 25 Gold and Platinum Records.

The artwork for the CD was completed by Glenn Sweitzer of Fresh Design, known in the music industry as designer for artists such as Tim McGraw, Rascall Flatts, Reba McEntire, Kenny Rogers, Hank Jr., Lady Antebellum and many others.

Music and Lyrics by Leyla Fences.

Co-writers on "Get the Truck Outta Here" & "The Next Time" - David Graham and Vaughan Daniel.

A LITTLE ABOUT LEYLA...

Leyla’s journey thus far has been anything but a straight line. Although she experienced a typical Texas upbringing in the sticks outside of Houston, as a middle-child born under the sign of the bull she was happiest when she was stirring things up so she took off from home early and set out to explore the world’s wider pastures.

Her zigzag took her around the world from high-falutin' graduate degrees and culinary studies in the U.S to language studies across the pond and south of the border.

With her wanderlust somewhat satisfied, more than a couple of tequila-induced hangovers under her belt and the memories of several Mr. Wrongs and their shenanigans fresh in mind, Leyla decided she'd had more formal and informal schooling than she'd ever need. She hocked most of her know-how and marbles in exchange for a shiny Takamine guitar and realized soon after that everything she was looking for could be created with 6 strings, 3 chords and a capo.

Leyla was last seen in Nashville at a songwriter night down on Broadway. If you have any information on her whereabouts, please let her know!
50
What's This
Advertisement