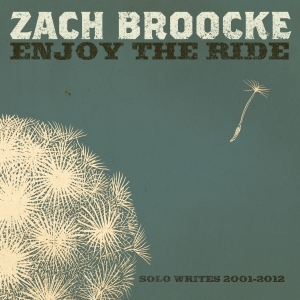 Zach Broocke, born in Milwaukee, WI, grew up listening to Jim Croce, Harry Chapin, Cat Stevens, and a lot of country tunes ala Willie Nelson, Don Williams, George Jones, Merle Haggard. Discovering he had a passion for songwriting Zach traveled to Boston to spend time compiling the songs that would make up his debut release, “Anywhere But Here Sessions” EP. He was greatly inspired by Simon and Garf...unkel, coffee, Van Morrison, cigarettes, Greg Brown and Canadian beer.

Leaving Boston in the early fall of 2001 Zach headed for Nashville, where he recorded his first full length album “Be Somebody.” This album was independently released by Suburban Sweetheart Productions, LLC, a production company/publishing house that Zach started in April of 2004. While in Nashville, Chad Brown, engineer/producer (Ryan Adams, Bob Seger, Steve Earle) introduced Zach to his writing partner Troy Johnson (Warner Chappell, Dixie Chicks, Keith Urban). The two of them penned many songs that were included on “Be Somebody” and Zach’s latest release “Last Call” EP. For seven months Zach toured everywhere east of the Mississippi and filled rooms in Nashville such as Twelfth and Porter, Third and Lindsley and Exit/In, performing with great acts like Shawn Mullins, Carbon Leaf, Mack Starks, The Bees and Bob Schneider.

Zach left Tennessee in 2005 for California. In L.A. he formed a band with a new group of musicians including Lester Nuby/drums and bgvs, Jamie Wollam/drums and bgvs, Jared Leifert/bass, Joe Corcoran/guitars and bgvs. L.A. is where he finished writing and recorded “Last Call” EP. Zach has played many L.A. venues including The Hotel Cafe, The Troubadour, The Viper Room, and The Roxy and the El Rey Theatre splitting bills with Josh Radin, Tim Jones, Amos Lee and Todd Snider.

Still penning songs with Troy Johnson, Zach is also writing songs with Mike Busbee, Scott Bennett (Brian Wilson) and David Hodges (Kelly Clarkson, Evanesense, Chris Daughtry). Zach’s song “Pullin up the Drive” from his “Be Somebody” album was featured in the motion picture “The Feast of Love” from Lakeshore Productions, released in 2007, starring Morgan Freeman and Greg Kinnear. Plus, "Why Can't You," which he wrote, recorded, and produced by himself in three days, was featured in the motion picture "Henry Poole is Here" also from Lakeshore Entertainment released in 2008, starring Luke Wilson and George Lopez. He has had songs featured in MTV’s “The Real World”, Oxygen Network’s “Bad Girls” and an online television show “Port City P.D.” Zach’s song “Remember Me” from his “Last Call” EP was featured in the April 07 issue of Paste Magazine.

Lakeshore Records will release Enjoy The Ride: Solo Writes 2001-12 on May 22, 2012. The album is a retrospective of Zach's solo writing skills and features the brand-new single, "Enjoy The Ride." Recorded and mixed in studios in Tennessee, Massachusetts, and California, this collection, written over a span of 11 years, showcases his personal and professional journey as a songwriter.

Zach’s music is about all of the things we never say and wish we could have; all the times you let slip through your fingers; and being thankful for the moments where you then realize that maybe, just maybe, that’s just the way it’s supposed to go.
0
What's This
Advertisement