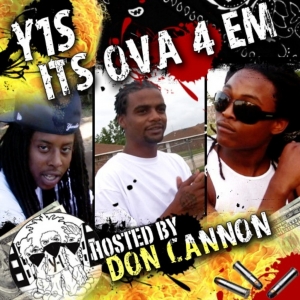 Y1s Presents: Its Ova 4'em Hosted By Don Cannon
Youngest 1’s Relentlessly abrasive, unapologetically ignorant and undeniably brilliant, New Orleans rap trio Youngest 1’s (Y 1’s) live up to their name. Like mad scientists in the lab, Danger, Killer and Supa.D bring the ruckus with vivid storytelling that balances harrowing street narratives with conscious rap pride. Born and raised in the notorious St. Bernard housing projects in the city’s seventh ward, Y 1’s are a credible, gimmick-defying, no-filler group looking to translate their underground street fame into the mainstream rap game. The trio’s “get it how you live it” lifestyle provides the perfect landscape for their aggressively slick lyricism that trumps most established artists. Backed by Midas touch producer Drumma Boy (Young Jeezy, Ludacris, Rick Ross, Plies), Y 1’s stir elements of jazz, rock, funk and blues into an arbitrary mix that reflects their rich Crescent City musical heritage. Looking to be the architects of a new era of rap, Y 1’s and their label Street Money Records, are laying the blueprint for an unconventional sound that can not and will not be denied. Y 1’s were practically cliqued up from birth with Danger and Killer being brothers and Supa.D being a childhood friend, forming a bond tighter than the dreads that adorn their heads. It’s that uncontainable, wide-eyed enthusiasm and tireless work ethic that will contribute to their meteoric rise, as well as the pure and potent lyrical ingenuity they stamp each track with. In their quest to create the perfect debut album, the Young 1’s are employing an ambitious strategy of diverse yet cohesive cuts that will both entertain and educate. With shine and grime, the Y 1’s are looking to cement their place in hip-hop, establishing their own identity in an assembly-line industry.