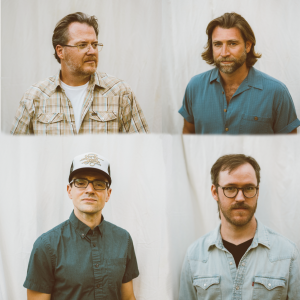 To understand the musical entity known as Wood & Wire, it’s best to toss aside expectations regarding the sounds that might be created by four pickers holding assemblages of wood and wire — specifically acoustic guitar, bass, banjo and mandolin

Yes, this Austin-based quartet’s last album, 2018’s North of Despair, gave them a permanent new adjective — Grammy-nominated — and yes, the category was Best Bluegrass Album. But for the sake of comparison, let’s note that one of their major influences, banjo player extraordinaire Bela Fleck, has received two nominations in bluegrass categories — out of 33. (And one was for an album with “bluegrass” in its title.) We should also note that Wood & Wire banjo player Trevor Smith spent some of his teen years in Tucson, Arizona, playing in headbanger bands — while studying Bill Monroe and J.D. Crowe. Mandolinist Billy Bright, raised in El Paso, Texas, swore his youthful allegiance to punk rock. And bassist Dom Fisher holds a jazz studies degree from Ithaca College in upstate New York. All of which should be considered when listening to the band’s second Blue Corn Music release, the appropriately titled No Matter Where It Goes from Here.

All four agree the outside influences they’ve absorbed form the foundation of their musical wheelhouse. They don’t claim to defy categorization; they just ignore the notion of boundaries. “Us coming together and throwing those recipes in a blender is what makes the sound of what we do unique,” asserts Houston- and Galveston-raised lead singer/guitarist Tony Kamel — who, unbelievably, cites Wood & Wire as his first professional band outing, though he obviously developed prodigious skills since digging his mom’s guitar out of the attic at 12.

According to Fisher, the mere presence of a banjo makes people assume their main influence is traditional bluegrass — which, they hasten to note, they all love and admire. But none of them grew up playing it. Green Mountain Grass and Asylum Street Spankers alum Smith does admit he finds it both flattering and confounding when new converts approach the merch table after a show and declare, “I don’t like bluegrass, but I love you guys.”

Bright’s roots-music education, steered by his Deadhead older brother, threaded from Jerry Garcia/David Grisman collaborations to Fleck, Col. Bruce Hampton and inevitably, Monroe. “There’s nothing more punk than Monroe’s mandolin playing and the entire outlook he had on creating his own sound, writing most of his own material and defying convention by doing everything too fast and in the wrong keys,” says Bright. “The truth is, bluegrass has always been an incredibly progressive music.”
Clearly, they’ve had more than one philosophical discussion about the music they make versus common perceptions of the music they make. And this time around, they basically decided it goes wherever it goes.

“We try not to worry too much about that and just do our thing,” Kamel says. “If we try to force anything in this band, then it ends up not working out.”

The joy of listening to No Matter Where It Goes from Here comes from just how well they do their “thing.” On this nine-song collection, they combine virtuosic playing with engaging melodies and lyrics that range from mentions of Banksy and Kerouac (in Kamel’s “John”) to the 1794 Whiskey Rebellion and steam-powered river travel.


They’ve been playing the historical song, “Spirit of ’94,” written by band friend Geoff Union of Ragged Union, since being invited to perform at the 2018 Whiskey Rebellion Festival, held annually in Washington, Pennsylvania, where the insurrection began. On the charmingly melodic Robin Bernard/Dom Fisher tune “Paddlewheels” — which would totally steal the heart of late riverboat pilot John Hartford — Fisher sings, The river’s calling me like a dinner bell ringin’/Askin’ “Son where you been?”/Life goes by like a butterfly flyin’/Or a leaf blowing in the wind.

The river also figures in Bright’s composition, “My Hometown,” an El Paso reminiscence in which he mentions My hometown is steeped in funk/My hometown’s got the border punk junk. If those words evoke Punch Brothers before Stanley Brothers, that just affirms how broad the spectrum of bluegrass-oriented music really is.

Punch Brothers come to mind again — along with Fleck — on both of the album’s tour-de-force instrumentals: “Roadie’s Circles,” written by Smith, and “Clamp’s Chute,” Bright’s homage to Vassar Clements. On this beguiling, very jazz-oriented, barely edited “super live” track, Bright plays the Gilchrist mandolin he used while performing with the late fiddle legend. (Bright’s history also includes performing and recording with Peter Rowan, Tony Rice, Don Edwards and other bluegrass titans, as well as membership in the Two High String Band.)

Smith’s tribute to his late border collie, the album’s delightful centerpiece, starts with Rowan’s lusty yodel, then weaves traditional bluegrass tempos into an intricate rondo of interconnected textures, with jazz-kissed Southwest breezes and a Spanish-guitar interlude. Kamel says his guitar work on the track was inspired by listening to Willie Nelson (who deserves far more recognition for his incredibly dexterous, Django Reinhardt-influenced picking). The guitar Kamel plays, Bright’s 1951 Martin D-18, has not received new strings since before the band recorded their last album. They all agree the old strings just sound better.
With Pat Manske coproducing and engineering, they recorded No Matter Where It Goes from Here at The Zone, just outside of Austin in Dripping Springs. It’s one of the area’s most renowned studios, partly because of prized vintage analog gear such as its 24-track Studer reel-to-reel. Recording a few songs at a time as the mood struck, they experimented with that gear, trying unusual setups like plugging a 1923 Gibson snakehead mandolin through a Fender Twin amp and a Boss tremolo pedal for the Bright-written ballad, “Home and the Banjo.”

Eventually, they’d tracked enough songs for nearly two albums. To winnow, Fisher says, “We all made a list of what we thought would be a good group of songs to fit together, then looked at what all of our lists had in common.”

He’s credited with plucking the album’s title from “Home and the Banjo,” in which Bright manages to reference MP3s, Australian rockers AC/DC and Crowe, the banjo-picking New South founder and major force in bluegrass music’s evolution. But the title actually comes from these lines: No matter where it goes from here, you bet your bottom buck I’m gonna steer clear/They’re gonna build a phone right into your ear/No matter where it goes from here.

Bright intended to write an ode to chasing dreams and his favorite banjo players, “because banjos always lighten the mood.” But it got a little too light, so he pared it till Crowe became the lone named picker. Somehow, Kamel’s vocals perfectly balance a tone of gentle reminiscence with the weightier feel of a weary lament.

As for that lyric, Bright says it could sum up the artistic philosophy behind any band. Just getting to gigs, much less performing, staying together, sustaining the precarious lifestyle … the odds are stacked against success. “As performers,” he adds, “we understand this plight and that the only way forward, wherever we may land, is to put ourselves out there, no matter where it goes from here.”

For Kamel, it applies not only to the band’s dynamic, but the bigger-picture uncertainly of their musical future in a pandemic-tilted world.

“We’ll ride whatever wave that comes our way,” he assures. “We just can’t control what kind of wave that is.”
20
What's This
Advertisement