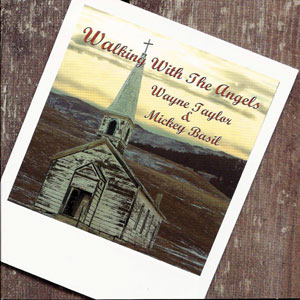 Wayne and Mickey decided to use their God given talents to create a collection of some of the World's most beloved hymns. Their goal was to keep the music as organic as possible by performing together as in a live performance. Mickey played the piano and C3 Hammond Organ, Wayne sang vocals and performed on an HD-35 Martin guitar.

Wayne Taylor a native of NC, is a singer/songwriter/guitarist. He was a student of the Armed Forces School of Music, and is a graduate of the University of the Pacific. He became a Master Chief Musician with the US Navy Band's country and bluegrass group "Country Current" in Washington, DC where he performed for 21 years. During his time in the service, Wayne performed in 49 states, at the White House for four US Presidents, Beijing China, Sweden, Halifax Nova Scotia, The Grand Ole Opry, Good Morning America, and The Nashville Now Show. Upon retiring in 2008 he formed the bluegrass band "Wayne Taylor and Appaloosa."

The music was recorded at The Legendary StudioEast, which has been at the center of music creation in Charlotte since Arthur Smith built the facility in 1964. Such legendary artists as James Brown, Johnny Cash and John Rich are but a few of the musicians that have come through the Legendary StudioEast over the past half century. The Recording Engineer was Tim Eaton, and Mastering was conducted by Mark Stallings.