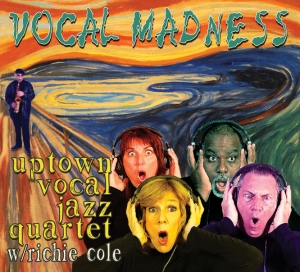 Critics have described Uptown Vocal Jazz Quartet as “vocalese at its best”…”as versatile and entertaining as any vocal group you will hear”… "electrifying"...“pure fun”…“sensational” ... “old school moving to new cool." Reviewers, radio personalities, and listeners around the world have praised them as a standout for their creative originality and superb musicality. For more than two decades, this singing foursome and their hot jazz band have built a loyal audience across five continents with their stylized arrangements of head-turning original songs and their original arrangements of American Songbook and jazz classics.
Inspired by and often compared to The Manhattan Transfer, with their tight SATB harmonies, engaging presentation and vocal sass, Uptown Vocal Jazz Quartet (UVJQ) has captured worldwide attention and put their own creative signature on the group singing style that mixes great fun with great art. They have been highly celebrated for spotlighting and integrating original songwriting into a genre that is principally known for creative arrangements of existing standards. UVJQ's sparkling sound is delivered with the spirited elegance, lush harmonic texture, and popping sizzle of a "vocal horn section," punctuated by original melodies and lyrics bursting with wit, sentiment, and occasional flights of vocalese fancy.

Uptown Vocal Jazz Quartet has been heralded by such legendary artists as saxophonist Richie Cole, singer/songwriter Bob Dorough, and singer Don Shelton (The Singers Unlimited and The Hi-Lo’s) as one of the most creative and captivating vocal jazz groups on the scene today. Richie Cole, who has worked extensively with The Manhattan Transfer and been featured on their Grammy-winning albums, declared Uptown Vocal Jazz Quartet "My new discovery, the whole package." He instantly recognized their sizzling audience appeal and the unique songwriting and arranging talents of their leader, Ginny Carr. A fan of swingin' vocal harmonies and a prolific songwriter himself, Cole invited Carr to arrange his own songs for her group and work with him on a recording featuring their collective original songs. Their new CD "Vocal Madness" features a high-flying and highly original songbook and performance by the power ensemble of Uptown Vocal Jazz Quartet and their band, with guest Richie Cole on sax. As of early 2015, "Vocal Madness" is topping the JazzWeek Charts and is being aired on hundreds of radio stations worldwide, including regular play on the popular syndicated program "Jazz After Hours." UVJQ continues to receive and fulfill many requests from Program Directors for on-air interviews and station IDs.

In 2014, UVJQ was a headliner performer and presented songwriting/arranging master classes at the legendary DeMiero Jazz Festival in Edmonds, Washington, then celebrating its 37th year. Founder Frank DeMiero, a well-loved national pioneer and promoter of vocal jazz performance and education, has selected UVJQ's songs and arrangements for his Sound Music Publications catalog, which now features the "Uptown Vocal Jazz Quartet Series."

In 2013, NPR invited UVJQ into the studio for a "Performance Chat" with host Susan Stamberg, for the second time in a decade. The broadcast was aired on NPR's "Weekend Edition." UVJQ has also been profiled and played on countless radio programs worldwide, including XM-Sirius Satellite Radio's "Real Jazz" Channel, Pandora Radio, and Radio Jazz Smithsonian. Their 2012 release "Hustlin' for a Gig" received numerous awards and accolades of distinction, appearing on the Billboard Top 25 Jazz Chart, Amazon's Best Seller list, and as an Editor's Pick by The Washington Post.

UVJQ is a featured artist on "Behind The Mic," an internationally popular website which profiles the innovators of vocal jazz and airs their video interviews. They share the honor with Bobby McFerrin, The Manhattan Transfer, New York Voices, The Real Group, and other legendary vocal jazz artists.

In 2012, UVJQ combined forces with the renowned Cote Ouest Big Band at "Les Nuits du Jazz Festival" in multiple cities on the West Coast of France. Having performed at this popular French jazz festival eight years earlier, UVJQ was invited back as guest artists in 2012 for the very special concert tour and celebration of the Cote Ouest Band's 30th anniversary. The audience of 3000 French citizens took great delight in their exciting show and proclaimed them "magnifique!"

Over the years, UVJQ has performed on the headliner stages at international jazz festivals in Ottawa, Detroit, Clearwater, Miami, and France, alongside jazz greats Tony Bennett, Nancy Wilson, Sonny Rollins, and many others. They have performed as guest artists with symphony orchestras and big bands, including the US Army Blues jazz ensemble at the US Capitol. They have opened concerts for such jazz legends as the Four Freshmen, Ahmad Jamal, and Charlie Byrd, and been featured performers at hundreds of clubs, festivals, concert series and special events throughout the US. UVJQ was also included on the 2008 Sony/BMG European compilation CD release, “Ladies and Gentlemen: the Best of Vocal Jazz”. The collection also included such vocal jazz legends as Ella Fitzgerald, Billie Holiday, Sarah Vaughan, Nancy Wilson, Carmen McRae, Frank Sinatra, Mel Torme, Tony Bennett, Nat King Cole, The Manhattan Transfer, and the NY Voices.