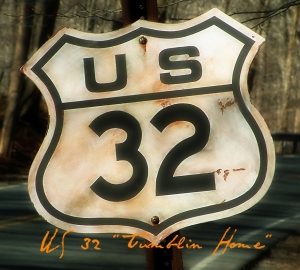 The USA rose up from romantic pastoral beginnings that have inspired American songwriters from Stephen Foster in the mid-19th century down to the present day. US 32, the married duo of Michael and Christy Kline named for an historic road also known as the “Grand Army of the Republic Highway,” have mined that rich legacy, creating a timeless tapestry of silky smooth vocal harmonies and evocative songs. In the process they have extended the classic folk tradition into a vital, contemporary art form that beautifully expresses joy, sorrow and optimism.

Michael was born in Baltimore, Maryland on March 8, 1965. A schooled musician, he studied classical guitar at the Peabody Conservatory while also singing and playing the music of Tom Petty, Bruce Springsteen and John Mellencamp in rock bands. Most notably, Michael Kline & the Gypsys (1992-96) released the critically acclaimed Seeing the Circle (1994) in the style of Southern California rock before he began performing solo. Christy was born on May 26, 1972 in Norfolk, Virginia and grew up in South Carolina listening to Tom T. Hall, Merle Haggard, Sam Cooke, Charlie Rich, Hank Williams and Patsy Cline. She sang in church choirs as a child, but did not start playing guitar until after college. She became more proficient under Michael’s tutelage following their marriage in 2001as they commenced to play as a duo to the delight of a growing fan base.

Inspired by the Robert Plant/Alison Krause hit recording of Raising Sand (2007), the result is a glorious 13-song set featuring 11originals and two select covers that tell vivid stories with contributions from co-writers Dillon O’Brian and Monty Byrom. “Down in the Field” has Christy with her honey and jam voice recalling a bittersweet youthful memory about a ballpark that served as a party destination before becoming a used car lot and removing a cherished adolescent touchstone. Bill “Rocksmith” Weber’s plaintive harmonica sets the nostalgic ambience as the softly moaning lap steel of Ben Peeler is accented by the nimble mandolin of Steve Blacke. On “Mabel’s Car” Christy describes a vintage automobile that holds precious memories for “Mabel,” who cannot bear to part with it even as she ages and slows down to the impatience of youth. Michael takes the lead on “Every Other Weekend” about the emotional pain of a divorced dad dealing with the shared custody of his son, convincingly channeling his heartache through understatement and nuance.

The title track is a stunning highlight and profound combination of history and creative songwriting by Michael. Based on a family letter from his great, great uncle George F. Kline who was an18 year-old in the Civil War in 1864, it paints a chilling picture of the horrors of war made all the more effective by the verbatim reading of the letter. Sparse instrumentation in a somber martial cadence evoking the era is provided by Michael on acoustic guitar, 6-string banjo and mandolin, and Brian Auer on tin whistles and bagpipes.

“I’m Gonna Miss You” amply demonstrates the magic when Michael and Christy harmonize together. A meditation on saying goodbye to a loved one leaving on a trip, it contains a remarkably catchy hook in the chorus that remains in the mind long after the track ends. The theme of an inanimate object holding unforgettable childhood memories is again addressed in “Hamer House” as Christy describes her mother in her old southern home now gone to dereliction. A dynamic upbeat change of tempo and subject matter occurs next in “Credit Cards” with Christy wryly ticking off the many traps of the plastic that lure the unsuspecting in hard times. As Trent Stroh “walks the basses” over the percussion of Denny Weston, Jr., Ben Peeler accompanies her sassy vocal with tasty bottleneck dobro. Christy allows her southern roots full flower on the deeply melancholy country ballad “Water Under the Bridge” written by Jamie Houston and Lois Blaisch. Over the appropriately weepy fiddle and pedal steel of Steve Blacke and Dave Pearlman, respectively, she pours her heart out like a contemporary Patsy Cline on this poetic tale of lost marital love.

Michael again steps forward on the folk-rocking “Chasin’ the Sun” that would make Tom Petty smile. In a musical valentine to Christy, he fashions a joyous ode to driving down the highway while using the sun as a metaphor. “Uncle Bill’s Farm” finds Michael following his folk influences all the way back to the Appalachians. Going dynamically solo on the nostalgic ditty written by his brother Brian, he accompanies his yearning vocal about a prized memory with perfect “olde timey” claw hammer banjo picking with Christy blending gorgeously on the choruses.“Jackson” is the honky tonk foot tapper that won a Grammy in 1968 for Johnny and June Carter Cash. The barbed banter between the husband and wife protagonists is a change of pace for the Klines, though they interpret the lyrics with subtlety rather than mere sarcasm while guest bluegrass banjo virtuoso Michael Munford adds real fire with his solo.

A different look at romantic strife is heard on “If These Walls Could Talk” with Christy using an anthropomorphic house as the observer of family conflicts as both Michaels offering sympathetic backing on guitar and banjo. The record ends on an upbeat note as Christy and Michael together sing “Thanks a Million” to each other over a sprightly bluegrass groove embellished handsomely by Steve Blacke on fiddle and mandolin. It is perhaps the most personal and revealing autobiographical song on a record that glows all the more brightly via their real life love.