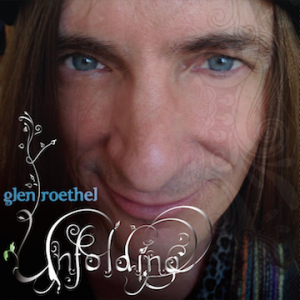 Glen Roethel’s new studio release, Unfolding is a refreshing collection of 12 new original songs which explore big questions like, “Why am I here?” and “OK, now what?” Fans are calling it “honest,” “personal,” and “all about the voice.” Perhaps, but the songs seem to draw from a deeper well – a place of transition, transfor-mation. Consider the hope in “Something Good” – rising like a phoenix from the devastation of California wildfires – or the playfulness in “Blue Canoe” peering through a child’s eyes to question, then ultimately forgive the social and ecological
impact of damming for electricity and drinking water. In “Family” Glen tells the true story of his adoption, unveiling the struggles and joys wrapped within the
great gift he received as a child: a stable home. The title track, “Unfolding As I Go” and the anthemic eco-justice call-to-action, “Beautiful Now” highlight the jagged seam where “surrender” and “activism” can be stitched together to inspire a patchwork quilt of hope.

Roethel is a New York-based, California-born contemporary folk singer-songwriter and guitar-player’s guitarist (though he also has played bass, keys and percussion in ensembles as diverse as a Jamaican Reggae band, a heavy alt-rock band, and
a jazz band of 3 formerly-incarcerated men with the Director of Deutsche Bank on drums). He has played in wondrous places like Gotham Hall, NYC and for TED
Conferences – delighting audiences with thoughtful songwriting, soaring vocals,infectious joy and accomplished acoustic guitar playing for more than 30 years.

His songs grace TV and syndicated radio, and are published in songbooks which include the Hal Leonard compilation titled 101 Inspiring Songs. As founder and
primary creative in the popular trio Gathering Time, Glen penned, arranged, recorded and produced most of the group’s catalogue, contributing similarly to 7 new records by his peers – some critically acclaimed – upon returning to his solo work in 2013. He supports other national artists such as Sloan Wainwright, Marci Geller, Penny Nichols, and Angela McKenzie in concert on guitar and vocals when not on tour himself. Most importantly he passionately supports his beloved wife, Dr. Dawn Ravella in her award-winning efforts for Restorative Justice alternatives to incarceration, tumbling socio-economic barriers, ending the cycle of poverty and creating a more just world for everyone.
0
What's This
Advertisement