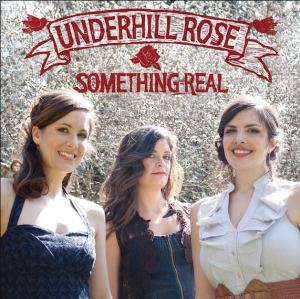 PRESS
"One of the most promising rootsy women artists in the Americana scene." - No Depression

"I was really excited when I found this group because I love the vocals, love the sentiment of the whole album...I think they're brilliant." - BBC Radio

"Their compositions are heartfelt, sparse and evoke emotive harmonizing like the Trio album by Emmylou Harris, Linda Ronstadt and Dolly Parton. Their musicianship can't be overlooked considering how their song craft and harmonizing create sheer beauty." - Swampland.com

"[Blends] the base elements of Americana, blue grass, R&B and roots music in a show of impressive harmonies." - Creative Loafing Atlanta

"If you appreciate a banjo, guitar and upright bass, and love rootsy yet contemporary ballads, check them out." - The Florida Times-Union

"Upon hearing Underhill Rose for the first time there is an immediate soothing quality that is easy on the ears with lyrics that strike a chord in anyones soul." - Jacksonville Music Examiner

"Their sweet and sultry vocals have evolved over the years and even more so with their latest effort." - The Frederick News-Post

"It's Underhill and Reed's vocal blend that sets the group apart from the pack." - Kingsport Times-News

"From Underhill’s piercing highs to Molly’s sultry lows, their songs are both soothing and invigorating, like the synchronicity of Sirens from abroad." - The Mountain Xpress

"I've never heard anybody harmonize like that. Just beautiful stuff." - 880 the Revolution

Underhill Rose blends aspects of Americana, rhythm and blues, country and bluegrass into an authentic sound that is all their own. These female troubadours’ original songs are wrapped in three-part harmonies and packaged with an eye-catching stage presence. The smoky voice of Eleanor Underhill joined with the soaring vocals of Molly Rose and the country twang of Salley Williamson creates a sound that can only be described as “heartfelt country soul.” Playing banjo and harmonica, guitar, and upright bass respectively, the trio has carved out a place in the Americana scene with songs that run the gamut from heart wrenching to sassy and playful to thought-provoking. The music is real and inspired, rooted in everything life has thrown at Asheville, North Carolina’s pre-eminent female trinity.

Underhill Rose makes music from the heart, drawing inspiration from folk bands, old country, and rhythm and blues divas that these ladies grew up listening to. The sound was captured, initially, on the group’s debut, self-titled album in 2011. The band's second release was made possible by a successful crowd-funded campaign along with the musical genius of producer Cruz Contreras of The Black Lillies and the multi-Grammy Award generating Echo Mountain Recording Studios. The product is a result of the boot-wearing trifecta’s close-knit collaboration that, for the first time, features three-part harmony and material from each of the members.

Since forming in 2009, Underhill Rose has played live throughout the Southeast, from the bluegrass of Kentucky to the sandy shores of the Florida coast. They have entertained crowds at festivals ranging from the Bristol Rhythm and Roots Reunion to the Warren Haynes Christmas Jam, and venues as renowned as the Grove Park Inn and the Biltmore Estate. The ladies have shared the stage with the likes of singer/songwriter Jim Lauderdale, Kevn Kinney of Drivin' N Cryin', Blackberry Smoke, Col. Bruce Hampton, Larry Keel, and the Everyone Orchestra featuring Jon Fishman and Papa Mali, and have been praised by industry legends, fans and media outlets throughout the country.

Armed with a fresh sound, visually appealing performances and an extraordinary ability to blend a multitude of musical genres, Underhill Rose is a trio with a sound that clings to listeners and audience members alike. The release of the new album in May 2013 is the beginning of a new chapter that will take the ladies to new heights and the music to new ears.