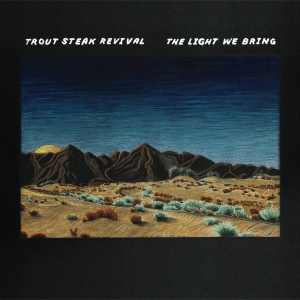 Passionate. Handcrafted. Self-Reliant. These three words comprised the foundation of Trout Steak Revival’s mission to create and release THE LIGHT WE BRING. Ever celebrated by fans for wearing their hearts on their sleeves through song, the band members dig deeper into their own humanity, delivering moving lyrics and echoing themes of love, death, home, and change. Throughout the album, the emotive songwriting finds balance and harmony in the band’s energetic and melodic instrumental arrangements.

THE LIGHT WE BRING is the fifth studio album by the Colorado string band and their most organic offering to date. The choice to self-produce the album was an intentional effort by the band members to summon a camaraderie in the studio setting that echoes the band’s practices together on the road. As both the artists and producer, they relied on themselves to deliver an album that was genuine in both its creation and presentation. The band’s inclusion of guest instrumentalists, including brass, woodwinds, and orchestral strings, enrich the album’s vibrancy. The variety of original songs crosses over countless genres and reflects diverse influences. The band’s self-reliance expanded even to the cover artwork, which features a chalk drawing of a high desert landscape by guitarist William Koster.

As the band’s sound has evolved over the years, so too has its albums, and THE LIGHT WE BRING only furthers that truth. What started as a group of friends exploring mountain bluegrass is now a free-form and exciting exploration of indie, folk, and roots music, beckoning listeners to join the band on its musical journey.