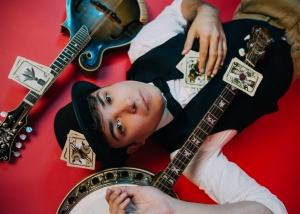 
About:
One-Ring Circus presents a variety of American music styles and how they blend together through the lens of the tenor banjo. Scroggins was gifted a tenor banjo at the beginning of the shutdown related to COVID19. This collection of songs includes jazz, bluegrass, old-time, country, folk, and fiddle music of various traditions. Almost all tracks feature solo banjo. “Seneca Square Dance” is a traditional fiddle tune from the Ozarks that is presented with bluegrass drive while maintaining the sparseness of its roots. “Don’t Get Around Much Anymore/Dunbar” is a medley of the Duke Ellington jazz standard and a tune from Ed Haley, a legendary blind fiddler from Tennessee. The latter features a type of foot percussion called podorythmie that Scroggins learned while teaching bluegrass in Canada that was traditionally used to accompany solo fiddlers playing for dances. “Waterlooplein,” the only original on the record, is a tune that Scroggins wrote during his time in Amsterdam that evokes the romantic melancholy of the quiet canals outside the tourist parts of the city. “Carpal Tunnel” is the only track to feature singing and the only track that doesn’t feature banjo. This labor movement song about the meatpacking industry was originally an acapella number from folk singer John O'Connor but Scroggins adds the rhythm of “hambone,” an African American body percussion tradition that he learned from his time performing with Mark Schatz. The steady rhythm of hands on the body accompany the line “I’ve got that old carpal tunnel and my hands won’t move but the foreman tells me to stay in the groove” delivers a message that is just as prescient today as workers struggle for safety during the COVID19 pandemic.

Bio:
With a signature raw mandolin groove, bold fashion sense, charismatic yet soft-spoken confidence, and keen sensitivity to style and artistic innovation, twenty-six-year-old GRAMMY nominated mandolinist Tristan Scroggins is quickly becoming a highly influential voice of both music and community in the world of bluegrass. An old soul with the drive and curiosity of youth, Tristan is dedicated to learning the history of bluegrass while creating an open and inclusive space for the music moving forward. In 2021 Tristan was honored with a nomination for the International Bluegrass Music Association’s Mandolin Player of the Year Award. After a decade of full-time touring with Jeff Scroggins and Colorado, he now lives in Nashville, Tennessee where he has become a part of the thriving bluegrass and acoustic scene and can be found performing, teaching, researching, and writing about music.