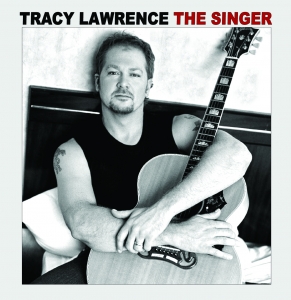 Robert K. Oermann, Sr. Reviewer/Columnist - Music Row Magazine
TRACY LAWRENCE/The Singer
Writer: Rick Huckaby/Kenneth Wright; Producer: Tracy Lawrence & Flip Anderson - LMG Records
—His voice is more resonant and rich than ever. The well-constructed song reflects on a life that isn’t perfect—all the narrator wishes to be remembered for is the fact that he is/was simply a fine singer. And this man certainly is.

Tracy Lawrence returns with a new album on a brand new label. Several things are different, most notably the scaled-down production. The Singer is an acoustic-based collection making it instantly quieter and more personal sounding than previous offerings.

No where is this more clear than on the title track. Supported by not much more than acoustic guitar and fiddle, Rick Huckaby and Kenneth Wright co-penned ‘The Singer’ features lyrics which could have been written specifically for Lawrence. There’s a few things they might say/at the mention of my name, he sings when running down some possible descriptions and ending with the wish that I just hope they don’t forget the singer. As well as being an accomplished writer himself, Lawrence is a master at finding songs which are a perfect fit for him, this one very much being a case in point. It is also material such as this which has previously caused me to praise Huckaby’s songwriting on these pages.

One of the staples of country music has long since been its ability to deliver sharp social commentary and a trio of songs here continue this tradition. The humorous ‘Pills’, co-written with Phil O’Donnel, criticizes the society of emotional zombies and its over-reliance on medication, while ‘Jealousy’ points to that ugly emotion as a source for much of what is wrong in the world. Co-written with co-producer Flip Anderson and inspired by the bad economic climate, ‘Hard Times’, identifies determination, hard work and faith as a way through.

The love songs on this album are unconventional. Intriguingly titled opener ‘Roswell and Marilyn Monroe,’ another Lawrence/Anderson co-write and the only song with more driving percussion, tells of a fascination with a mysterious woman who is described as somewhere between the two terms in the title. Lawrence and Anderson were joined by celebrated writer Bernie Nelson for ‘Heaven for a While’, expressing gratitude for the memories of a relationship with someone who has since passed on. Written by Huckaby and Lawrence’s long-time fiddle player Joe Caverlee, ‘Tender Enough’ is a mature love song starting from the admission that I ain’t always right there with you/ even when I’m in the room.

Two more Huckaby compositions are included. ‘Saving Savannah’, co-written with Michael White tells the tale of a caring brother going above-and-beyond to help his sister, and ‘Cloud of Dust’ laments the fact that dramatic Wild West exists are not available (they don’t make goodbyes like that these days) to motorists. Huckaby features on this track turning it into a conversation.