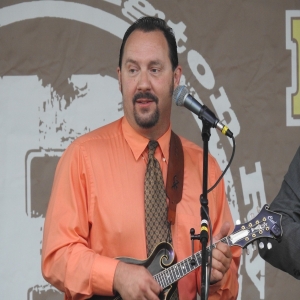 Tom Feller was raised in Southeastern Indiana. Growing up in the 1980's, Tom spent many weekends traveling with his uncles, The Boys From Indiana, as they traveled in their tour bus to the many Bluegrass festivals they played. It was during these trips he was exposed to many first generation Bluegrass artists, like Bill Monroe, Ralph Stanley, Jim and Jesse, and the Osborne Brothers. Their music had a big impact on him as he took it all in and developed his ear for the traditional sound. During this time, Tom got to see and hear many of the newer groups who influenced his music, as well.

In September 1991, within a few months of graduating High School, Tom went to work playing bass for the newly formed Larry Stephenson Band. He spent about 2 years there learning the ropes and gaining knowledge and experience in the Bluegrass business.

In May 2003, Tom reappeared in the Bluegrass world and found himself working for Rhonda Vincent and the Rage. It was there Tom learned the importance of vocals and harmony singing. In 2007, Tom went to work with 3 Fox Drive, who focused on harmony vocals and great songwriting.

In 2009, Tom approached Chris Hill about forming their own group to record a demo project and play a few shows. Feller and Hill and the Bluegrass Buckaroos was soon formed and went on to record four full-length albums and perform hundreds of dates, over the next ten years.

In January, 2020, Tom decided to record a song as a solo artist for a popular YouTube channel. Tom wrote and recorded the "Bus Grease Monkey" song as a real-life story of Scott Crosby, who travels in his 1947 GM Silversides bus that he has restored. Scott and his wife travel the country working on old buses and bringing them back to life, all while they chronicle their journeys via their YouTube channel.

Tom has always held an interest in old buses, as he grew up on them traveling with his uncles' Bluegrass band the Boys From Indiana. Tom has went on to own 3 of his own buses and has become a go-to bus driver on the short list of many Bluegrass entertainers, such as Bobby Osborne, Doyle Lawson, Rhonda Vincent, Sammy Shelor, Larry Stephenson, and Sideline.

Many Bluegrass bands have traveled in old buses throughout the years and Tom felt it would be good to write a song that combined the work of Scott Crosby (aka, Bus Grease Monkey) and the Bluegrass and bus connection.

The song is available for purchase on iTunes and the Google Play Store June 2, 2020.
1
What's This
Advertisement