(This is the) Squirrel Hunters 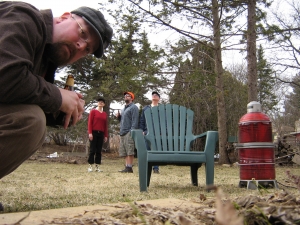 "This is the Squirrel Hunters..."

For those of you familiar with John Hartford, it's hard to verbalize these five unassuming words without channeling the mono-baritone inflection of his voice, just prior to sawing off a four count with his fiddle that sets "Squirrel Hunters" into motion.

So why name a band after the way John Hartford introduces an obscure Ohio River Valley fiddle tune? Well, it's possible we were just itching for a reason to print t-shirts with a squirrel silhouette on them! And let's face it... those fuzzy little tree-rats are funny, not to mention delicious. Of course for a more poetic explanation, one might say that we find the odd tonal center of this composition to be representative of the music we like to play as a group.

In keeping with the social congregative history of traditional fiddle based dance music, "(This is the) Squirrel Hunters" is comprised of members from various different bands and is more of a musical think tank than a stringent band. That's not to say that the five musicians (well four musicians & a banjo player) that make up the collaborative don't take the music seriously because nothing could be further from the truth. What we lack in the way of common band practices, politics, and, to a lesser extent, dress code, we make up for in song selection and interpretation. We believe that Bluegrass is a living, breathing art form that should be allowed to grow, though not completely devoid of the occasional pruning. We have no prejudice against Bluegrass bands playing tunes like Hey Jude (Uh, um Mr. Batyko?) though that's not what this band is about. We make regular musical forays outside the protective walls of Bill Monroe, The Stanley Brothers and Flatt & Scruggs, but always with caution, and never without a long rifle.

(This is the) Squirrel Hunters is a traditional Bluegrass co-op from Madison, Wisconsin.
26
What's This
Advertisement