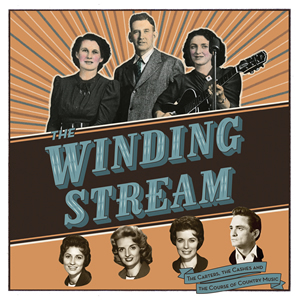 There is a stream that courses through American roots music. Its source is in the Appalachian foothills in a place called Maces Spring, Virginia. It was there that A.P. Carter, his wife Sara and his sister-in-law Maybelle began their careers as three of the earliest stars of country music. From their earliest days as Victor recording artists to their international success via the phenomenon of Border Radio, the Original Carter Family made their mark on the history of American recorded music.

Beth Harrington’s documentary about this saga has played
festivals and won awards and accolades across the globe.
Omnivore Recordings, in conjunction with Harrington, is proud to present the soundtrack to this very important film: The Winding Stream—The Carters, The Cashes And The Course Of Country Music.

With original tracks from the iconic Original Carter Family, through performances by legends George Jones and Johnny Cash, and into the present with John Prine and Rosanne Cash, The Winding Stream sends listeners on an audio journey through the history of the music we now know as “country,” how it came to be, and how it endures today.

With liner notes from Harrington, pictures from the John
Carter Cash archives, and mastering/restoration from multiple Grammy® winner Michael Graves (whose most recent win was for his work on Omnivore’s Hank Williams: The Garden Spot Programs, 1950), this CD and Digital release is a must for those who know, who love and who want to learn more about this truly American musical genre, its origins and its legacy.

Take a ride back to the future on The Winding Stream.
33
What's This
Advertisement