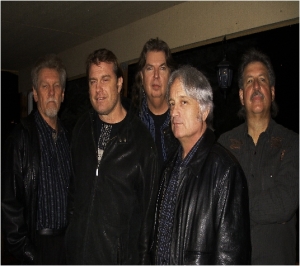 Singer songwriter Rikki Dee Hall started his artistic journey immersed in the influences of Gospel, Country, Blues, and Rockabilly in his hometown of Walhalla, SC. At the tender age of five, he played piano at his local church and by his eighth birthday, he received his first guitar as a birthday present. As an adult, he has shared the stage with many of the top bands of the time including The Allman Brothers, Grand Funk Railroad, Savoy Brown, Humble Pie, and Z Z Top to name but a few. After moving to Colorado by way of the US Army, Rikki Dee met guitarist Steve Petrohoy in 1994.


Rounding out the band’s line-up is drummer Rosendo Rodriguez. He proudly claims his influences as Don Brewer, John Bonham & Michael Shrieve. Born and raised in Los Angeles, Rosendo has developed his own unique style that adds much to the heart and soul of the Voodoo Hawks. His abilities as a rock solid drummer make a perfect match for Chris’s bass prowess and together they form a powerhouse rhythm section.

Since the band’s formation, they have opened the show for such artists as Blackberry Smoke, Tab Benoit, James Cotton, Dick Dale, Bernard Allison, Leon Russell, Omar & The Howlers, The Derek Trucks Band, Savoy Brown, Jimmy Thackery & The Drivers, John Mayall & The Bluesbreakers. The band has performed at such festivals as the Pikes Peak Blues Fest, Sturgis Motorcycle Rally, Tejon Street Bike Fest and The Colorado Rock & Blues Festival. Together these fine musicians from an incredible musical unit that has been road-tested to a fine-tuned machine.
0
What's This
Advertisement