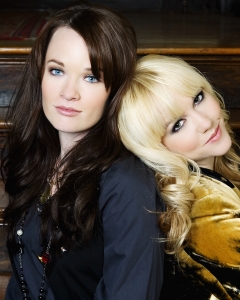 The Two Timers are hometown girls from Clover, South Carolina. Best friends since high school, Margaret Rogers and Julia Salter have always been big dreamers. After spending a few years in college, they decided it was time to pursue their dreams of becoming country music stars. In October of 2005 they packed their bags and moved to Nashville, Tennessee.

Their Rags-to-Riches story is quite remarkable, "At first we were servers at Sam's Sports Bar and then quit to become janitors!" Their real job and what they love the most is being entertainers. Salter began songwriting to differentiate herself in a high school talent contest because all of the other contestants performed cover songs. Rogers explains, “I love all kinds of music but country is my heart and soul. I love the way it always has a real story to tell. It makes me laugh, cry and even causes me to look like a crazy person when I sing and dance while driving! Once I made the decision to move to Nashville, I started writing my own songs.”

In 2008, their persistence paid off as The Two Timers were prominently featured on CMT's "Can You Duet." The girls were so determined to make it on the show they chose to audition rather than show up for work. “It was a great experience for us because it gave us hope. We hated being janitors, plus it was a tough time in our lives,” Salter said of the process. Rogers agreed. “We learned a lot about ourselves and each other and how to work together under extreme pressure. We definitely became closer as a duo and as best friends,” she said.

Being on “Can You Duet” has given them the opportunity to share a stage with some of the most amazing talents in music. The Two Timers have played with Richie McDonald of Lonestar fame, multi-Platinum hit songwriter Jeffrey Steele and Show Dog recording stars Trailer Choir.

With their unique country sound, The Two Timers hope to spend every night with their fans while singing their music. "We want our songs to inspire those who hear it and to let them know that dreams can come true!"
3
What's This
Advertisement