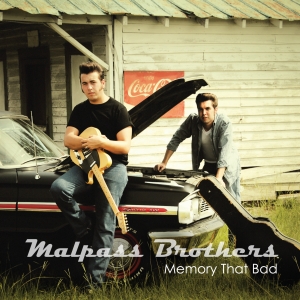 The Malpass Brothers were steeped in country music from an early age when their grandfather began teaching them how to play songs by Hank Williams, Sr., Merle Haggard, Porter Wagoner, Kitty Wells and Ernest Tubb on the guitar. With traditional country music ingrained into them, it only seemed fitting that they would carry on that family tradition. Little did they know that one day it would lead to a steady gig of performing on stage with one of the country music legends their grandfather admired.

After years of gigs and performances across the U.S., the brothers have found themselves in a position that only seemed to be possible in dreams. Chris and Taylor Malpass began opening for Merle Haggard in 2008, and continue to follow Haggard all across the U.S. and into Canada.

Haggard first saw the brothers when they opened for him at a concert in their home state of North Carolina. The brothers didn't know that the Hag had been watching and listening to their performance from backstage. After Haggard got a good look at the elder of the brothers, Chris, he told his road manager that he was the spitting image of Lewis Tally, who signed Haggard to a record contract in the 1960s.

Haggard told his road manager to setup a meeting with the brothers and the rest is history. Two weeks later, Chris and Taylor were on Haggard's tour bus for that meeting, and less than a month later the brothers began opening gigs for a man whom they have admired and emulated since they were young boys.

The brothers continue to perform with their own band across the country when not on tour with the Hag. Influenced by the likes of Johnny Cash, Ernest Tubb, Elvis Presley, Faron Young, Waylon Jennings, Marty Robbins, the Louvin Brothers, the Wilburn Brothers and many other artists from that era, the brothers have been able to fine tune their performances into a unique, but current style of traditional country music and comedic banter.

Having opened for Ray Price, Marty Stuart, Rhonda Vincent, Willie Nelson and many other famous music artists, the boys have felt right at home on stage with Haggard.

Scott Joss, who is often praised as the "heir to the Bakersfield throne" because of early associations with Tiny Moore and Merle Haggard, and his later affiliation with Buck Owens and Dwight Yoakam, has produced the Malpass Brothers' new album on the Hag Record label. "Memory That Bad" was released in the spring of 2011.

The album includes originals by the Malpass Brothers, Haggard, and Joss - along with a few covers of some of the brothers' favorite songs from the past. Joss, who currently tours with Haggard as his fiddle player, has become a close friend and mentor to both Chris and Taylor.

Energized by their recent success of touring with Haggard and the release of their new album, the brothers continue to strive to take their music career to the next level. Chris and Taylor will be making their third trip to Ireland and first trip to Scotland for folk/traditional music festivals this fall. They are also expected to be filmed for a segment on the Marty Stuart Show, which airs on RFD-TV.
39
What's This
Advertisement