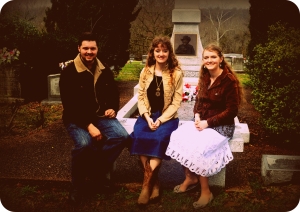 The Johnsons' Bluegrass Band's new album "Cloudy in Kentucky" will be available for purchase soon on iTunes, Amazon, CD Baby, and anywhere else you download or stream your favorite music!
For an interview of the artists by Brett Smeltzer on their songwriting, album release and music in general, go to www.thebluegrassjamboree.com and click on "On Air Schedule"--then on "On Demand: Hear it Here." The Johnsons Bluegrass Band is a little scroll down! Give it a listen.

The Johnsons’ Bluegrass Band is a sibling group of musicians, all under 25, who play traditional Bluegrass and gospel music. Samuel, the oldest, is 24 and plays fingerpicked guitar and a mean banjo, and sings baritone and even lead vocals when needed. Hannah (23) plays rhythm guitar and mandolin, as well as lead singing and writing many of the songs the band performs. Lydia, age 21, picked up the fiddle nearly 5 years ago, and has hardly missed a day of practice since. Her rhythmic, new-twist-on-an-old-sound fiddle tunes are always popular with listeners. She sings tenor harmony vocals as well. Though not quite a regular member of the band yet, Simon, at 18, has begun to play lead guitar on many of their songs. He is seriously phenomenal as a guitarist, (and not just for his age), earning oohs and aahs over his perfect up-and-down-the-neck imitations of Ricky Skaggs, Bryan Sutton and other great Nashville guitarists—not to mention the hot riffs on the spot, when he takes a solo on stage!
The Johnson family has always been quite musical; Dad (Steve) played electric guitar in a band when he was young, and Mom (Heidi) has shown much natural talent on the French horn from a young age, and practices as often as she can while administrating her large and busy household. Both parents sing and have introduced their 12 homeschooled children to all kinds of fine music from a young age. Incidentally, none of it included bluegrass—until 2012, when they were loaned a DVD of some of the best acts in the genre performing a festival-style show in Nashville. The music immediately interested Sam, Hannah and Lydia, and with help of family—especially Dad & Mom & grandparents—the Bluegrass Band was formed.
With essentially no Bluegrass culture in the Upper Peninsula for teaching or advice, the Johnsons learned entirely by listening to CDs of their favorite groups. “We started from absolute scratch,” Hannah laughs, “We did not even know if there was a standard key to tune to.”
“True Bluegrass is something a lot of people in our area aren’t familiar with,” she continues. “Often before I play the mandolin for somebody, I have to first explain exactly what the thing is.” The band has a lot of fun spreading awareness of the music, however, and never gets tired of explaining it (and demonstrating it ) to those eager to hear. A ‘hillbilly’ image is also something people associate with the banjo and with Bluegrass in general—and while some of this is true and even fun, the best Bluegrass of today is a highly virtuoso music, perfectly suited for discriminating audiences and the concert stage.
The Johnsons are soon to release a new single, “Cloudy in Kentucky,” the title track to the full length album soon to follow. This album consists of all original material by the band. Since Hannah has written over 160 songs, they were free to choose their favorites from this repertoire, and as a result the songs on this album are special to them. They are also honored and proud to feature Stuart Duncan’s twin fiddling on track 2 of the project, Lydia’s instrumental, “Mountain Sound.”
“It’s a fun music to play, because it’s very heartfelt,” Hannah says. “Del McCoury (leader of the best band in Bluegrass) once said, ‘The most important thing about going onstage is if you can touch some folks with a song.’ And Bluegrass really does seem to touch people. There’s a simplicity and candor about it that everybody can identify with. That’s a big goal of ours as a group—to uplift folks, whether it’s with a happy, peppy song or one that identifies with their sorrow. It makes us the happiest when it picks up somebody’s day.”
You can find videos of The Johnsons Bluegrass Band by searching “The Johnsons’ Bluegrass Band YouTube” or by visiting their Facebook page, www.facebook.com/JohnsonsBluegrass. Their website is under construction at www.thejohnsonsbluegrassband.com.