THE EBONY HILLBILLIES - 5 MILES FROM TOWN 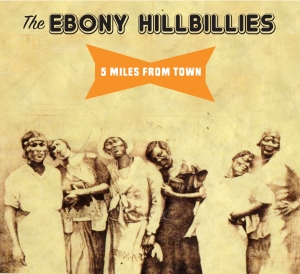 Click here to go to The Ebony Hillbillies Music Page

THE EBONY HILLBILLIES
From the street corners of Manhattan to the hallowed stages of Carnegie Hall and Lincoln Center to TV appearances on the BBC and ABC’s “Good Morning America,” The Ebony Hillbillies are a true phenomenon, reviving the lost art form and American legacy of string band music for a whole new generation.
Continuing to bring a fresh urgency to the genre for a 21st Century world in need of some deep musical education, the dynamic ensemble – led by Henrique Prince (fiddle, vocals) with Norris Bennett (banjo, mountain dulcimer, guitar, vocals), Gloria Thomas Gassaway (on vocals and bones), acoustic bassist William “Salty Bill” Salter (3x-Grammy winning co-writer of legendary pop hits like “Where is the Love” and “Just The Two of Us”), Allanah Salter (shaker, vocals), Newman Taylor Baker (washboard percussion) and A.R.(Ali Rahman) on “cowboy” percussion kit - are releasing their latest full length album, 5 MILES FROM TOWN [EH MUSIC].
Infused with the Hillbillies’ trademark mix of pop, country, bluegrass, folk and jazz, the full length collection reflects a soulful, gritty and alternately funky, romantic and socially conscious place where toes are always tapping, percussion is slapping, fiddles are jamming, front porch chairs are rocking, banjos are plucking and voices are raised in determination and triumph.
Mixing lively instrumentals and vocals over the course of 11 tracks and 3 alternately playful and hard-hitting snippets/skits, the group performs everything from a down home fiddle jam (“Hog”), the gentle romantic cautionary tale "Fork in the Road” and an intimate cover of Bonnie Raitt’s “I Can’t Make You Love Me” to the incisive social commentaries “Another Man Done Gone (Hands Up Don’t Shoot)” (about black men and police shootings) and “I’m on My Way To Brooklyn,” which rolls as a lighthearted NYC inspired spiritual until the end...and three gunshots.
The Ebony Hillbillies started out on the streets of Manhattan, but their vibe and influence has extended over the years to acclaimed live performances at legendary venues like Carnegie Hall and Lincoln Center; appearances on the BBC, Good Morning America, NBC, CBS, etc., international music workshops and festivals, visual artist collaborations at museums (including The Whitney with phenom Kara Walker and The Smithsonian Museum), Foot stomping and Hand- clapping Dance parties and more. In the digital era, they have sold thousands of hard copies of their CDs – Sabrina’s Holiday, I Thought You Knew, Barefoot & Flying and Slappin’ A Rabbit – Live! – at their shows and via their globally popular website, www.theEbonyHillbillies.com

RECORDED BY STEPHEN CEE & AW AT GLO’S IN JAMAICA, QUEENS (NYC)
MASTERED BY ANDY TAUB AT BROOKLYN RECORDING
PRODUCED BY AW & THE EH

AND SPECIAL THANKS TO HARRY TAYLOR’S ORIGINAL FAMILY PHOTOGRAPH FURNISHED BY GLORIA THOMAS GASSAWAY FOR THE COVER ART DESIGN EXCELLENTLY PUT TOGETHER BY MR. HOLLIS KING

The first selection,“Hog-Eyed Man,” is not only attributed to NEW WORLD AFRICANS but may also have its beginnings in the late eighteenth century. This is fine with us because we fancy ourselves as players of old Black vernacular music. A ”Hog Eye” is a kind of boat and many Black Men and women of those times managed to “escape, to the sea. We hope you can feel that intensity from A.R.’s swinging foot-stomping pulse, Newman Taylor Baker’s tap dancing washboard, Dave Colding’s droning bass and Henrique Prince’s fiddle-a-blazing on this opening instrumental. It is quite appropriate since this release marks a new musical adventure in the EH repertoire….

“Wang Dang Doodle,” is a product of the genius of Willie Dixon, and the wealth of golden performers like Koko Taylor and HowlinWolf, who Dixon originally wrote it for - claimed it was too "old-timey" sounding - like an old levee camp number, were the 50’s & 60’s Chicago Blues Chess recording stars. They produced some of the greatest music ever conceived, and as you can hear left a legacy for parties until the end of time. His lyrics, "...tell everyone you meet. Tonight we need no rest, we really gonna throw a mess. We gonna break out all of the windows. We gonna kick down all the doors. We gonna pitch a wang dang doodle all night long!" - say everything about an Ebony Hillbilly Party! An EH show fave. When the wonderful “Salty" Bill Salter starts this classic bassline - Go get your party clothes on as gutsy Gloria Thomas Gassaway and Allanah Salter belts this sassy one so good - We think Mr. Dixon would be proud!

“Darling Corey,” Is as elegant and as broad in scope as any old time song would want to be. Corey works hard and has built a “StillHouse.” The revenuer’s coming to find Corey and tear that StillHouse down. Corey has a gun, or two, and a mind that is set on the freedom to do as he pleases. This song’s roots may, in fact, go back quite a few years before it was sung on American shores. Mr. Norris Bennett’s rich vocals and A.R.’s seductive old meets new island rhythms set the tone for this danceable remake.

A modern ballad covered by many artists made famous by Bonnie Raitt, that taps into the eternal idea of unrequited love. Here done by the EH as a waltz or 3/4 meter featuring Gloria Thomas Gassaway’s sentimental vocals and Henrique's lyrically speaking viola.

An EH show fave is actually more of a “Rag.” At our shows, it has become an instrumental dance number favorite for our fans. We are always overjoyed at the number of people who will get up and do the modern-contra dance “the Electric SLIDE,” to this tune.

The old and the new come together easily sometimes in Ebony Hillbillies-land. Sung and arranged organically beautifully by Mr. Norris W. Bennett. CREAM is a song by The Artist, formerly known as “Prince,’’ whose lyrics have a timeless elegance expressed here - some buck dancing, Banjo picking and fiddling.

"I’m On My Way To Brooklyn" was composed by the Late Harry Thomas whose mother and aunts are on the EH cover of the 5 Miles From Town cd. This piece, well done by Harry’s daughter - Iris T. Olden, represents NYC - and it's boroughs - namely Brooklyn from an older time - its a perspective seldom heard anymore. This track sets up the next track on this cd which brings us back sadly to the irony of our present reality..

This song is very old about an African American imprisoned man, wife or girlfriend, speaking about someone who died while incarcerated. The song used to speak of a “Parchment Farm,” a prison, where sometimes you never came back from. How fitting for today for those who even on the outside, don’t feel free. Its a shame - featuring All the ladies on this - Gloria Thomas Gassaway, Allanah Salter, Iris T. Olden and Henrique Prince. We’ve updated the words - with a nod to the Black Lives Matter movement! You feel as if you were at a rowdy EH town hall meeting.

I first came upon this song in a book of old fiddle tunes. It always struck me that this was the type of tune Black players played for their own, and despite the controversy over the “N,” word, this period piece needs this language to give it a certain type of provenance. We don’t sing anything in this version, and the music is so powerful that we don’t need to. It feels like a creole mixture, a lil zydeco, an old-timey attitude but always Ebony Hillbillies in the end!

Sung by Henrique Prince - a personal fave. Smokey Robinson, IS the romantic poet of our musical age. This song, however, is served up, because it is actually a fable, handed down as if from Father to Son, or from an Elder to a younger generation. It starts with an opening violin solo cadenza - with an A.R. count off into even more violin crooning setting up Henrique’s vocals.

11. WHERE HE LEADS (I WILL FOLLOW) 3:11
Songwriter/Author: Traditional/ERNEST W. BLANDY - Arr. by THE EH
Publishing: THE EBONY HILLBILLIES MUSIC INC

A gospel tune that embodies all the grace and elegance of an earlier age - sung by Norris Bennett & Allanah Salter...banjo and the beautiful bass of "Salty Bill" Salter.

An old rollicking, hands down frolic - featuring the EH band with a raucous banjo; a great percussion solo ending by our resident washboard rhythm machine - A.R. on his cowboy Pots&PansKit and the incredible Newman Taylor Baker on shotgun shells&washboard. This is us, this is what we like to do. It is considered a “crooked” tune. “Crooked" tunes are an American staple. Though unorthodox - Its catchy, hypnotic & oh so infectious! This is the EH’s studio version. Check out the live version on EH’s ‘Slappin’ A Rabbit - LiVE!'
17
What's This
Advertisement